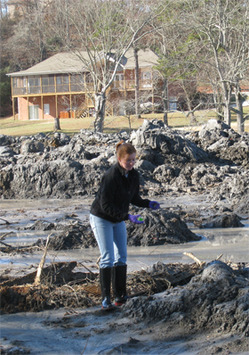 This month marks two years since a coal ash holding pond collapsed at the Tennessee Valley Authority's Kingston power plant in Roane County, Tenn., sending a billion gallons of waste laden with arsenic, lead and other toxic contaminants into a nearby community and the Clinch and Emory rivers.

During that time the U.S. public has learned a great deal about the hazards associated with coal ash, a serious environmental problem that was largely ignored before the disaster -- and new information continues to emerge.

One of the latest lessons comes via a team of researchers at Duke University's Nicholas School of the Environment in Durham, N.C. The findings of a study they conducted that was published last week in the peer-reviewed journal Environmental Science & Technology call for revamping the way environmental contamination from coal ash is monitored.

"The take-away lesson is we need to change how and where we look for coal ash contaminants," author Avner Vengosh, a professor of geochemistry and water quality, told Duke's news service. "Risks to water quality and aquatic life don't end with surface water contamination, but much of our current monitoring does."

The study documents contaminant levels in aquatic ecosystems in the 18 months following the Kingston disaster. The Duke researchers found that high concentrations of arsenic from the coal ash remained in what's known as "pore water" -- water trapped in river-bottom sediment -- long after contaminant levels in surface waters dropped below safety standards. Samples collected anywhere from 10 centimeters to half a meter below the surface of sediment in downstream rivers contained arsenic levels of up to 2,000 parts per billion -- far above federal limits of 10 ppb for drinking water and 150 ppb for protection of aquatic life. Pore water is critical because it's where the biological food chain begins.

"It's like cleaning your house," Vengosh said. "Everything may look clean, but if you look under the rugs, that's where you find the dirt."

The researchers also found that acidity and oxygen levels in water play important roles in determining how much arsenic and other coal ash contaminants leach into the environment. The findings will help scientists better predict the fate of contaminants from coal ash storage sites.

The study comes as the Environmental Protection Agency is deciding whether to regulate coal ash as a type of hazardous waste -- something Vengosh supports.

"As long as coal ash isn't regulated as hazardous waste, there is no way to prevent discharges of contaminants from these facilities and protect the environment," he said.