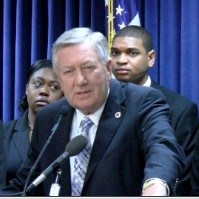 When Republicans launched campaigns in 20 states this year for laws requiring voters to show photo ID at the polls, they likely saw it as a chance to score a quick political victory on one of their favorite causes.

But the GOP's urgent and coordinated push is encountering growing resistance, led by citizens who fear they could be disenfranchised by new barriers to voting, as well as election officials who balk at the price tag of a costly new government program.

The diverse group reflected the range of N.C. voters who could be affected -- seniors, students, the disabled and low-income and homeless citizens who may not have photo ID cards. Rep. William Brisson (D) called the measure a "slap in the face" to his largely rural district in Bladen County:


It involves about 35 percent of my voters. These are people who still feel like they are part of this world and want to vote, even though they are in long-term care homes and might not have photo IDs. These are people this is just a direct impact on.

Courtney Scott, part of a large contingent from the state's historically black colleges, described the burden such a law would pose to students, including those from another state who are legally entitled to vote in N.C. but don't have an ID card for this state. As Scott said:

North Carolina shouldn't hassle its citizens when they are trying to exercise their God-given right to vote.

You can watch a video of the press conference here:

A report by North Carolina's WRAL TV found that at least 700,000 registered voters, and up to 1 million, didn't have a driver's license or photo ID issued by the state Department of Motor Vehicles.

The conservative Civitas Institute, which is almost entirely funded by Republican donor Art Pope, countered that one of their phone polls showed 99 percent of North Carolina voters had photo ID cards. The group didn't comment on whether likely disenfranchised voters would be underrepresented in a phone survey.

Voter ID bills are also facing another line of attack: opposition from election officials who fear the steep costs and added administrative burdens of the laws at a time when local and state agencies are already making deep budget cuts.

A Facing South report estimated that the North Carolina bill would likely cost the state at least $20 million over three years.

This week, Iowa's state association of auditors -- 60 percent of which are Republicans -- announced they were opposing a proposed voter ID law because it was too expensive, would hurt voter turnout and was unnecessary given the miniscule number of voter impersonation cases:

"We already have a very secure elections process. It doesn't seem to make good sense in tough economic times to increase the costs and make it more difficult to vote," said Tom Slockett, Johnson County's 34-year elections chief. "It could be a chilling factor to people who aren't real motivated to vote anyway.

All of that costs money -- and, especially if the state cuts corners in giving localities the resources they need, increases the chance of disenfranchisement. As Hermann-Brown argued in her testimony:

With the addition of more forms, more copies, more requirements, there will be an increased ability for error. Because of these errors, many voters' ballots will not be counted. What about their "right" to vote?

INSTITUTE INDEX: The backlash against expanded voting rights in Virginia