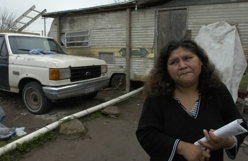 Low-income families along the Texas border could lose millions of dollars over the next decade and see their voice in government even further diminished because, from the statistical reality of the federal government's 2010 census, they don't exist.

The 10-year population count may have missed as many as 300,000 residents of the Lone Star state, almost all of whom live in the unincorporated subdivisions along the Texas-Mexico border known as colonias. Mired in deep poverty, most residents lack basic amenities like running water and paved streets. Though predominantly Latino, 65 percent of colonia residents -- and 85 percent of those under 18 -- were born in the United States.

Unwilling to have so many people ignored, Hidalgo County has hired a lawyer who plans to sue the federal government for violating protocol by failing to mail census forms to 95 percent of colonias residents. Several other Texas jurisdictions may follow.

The stakes are high. Census figures determine how much money states and regions get in federal funding. They also trigger the reapportionment of voting districts so that residents are equally represented in government. Yet decade after decade, advocates for marginalized groups protest the official numbers, galled that those most in need of government services are the same people deemed "hard to count" and repeatedly overlooked.

The term "hard to count" is based on a scoring system that tabulates everything from community income to whether you have a telephone at home, lack fluency in English, or live in a rural area. Residents of the colonias fit all the criteria.

Which is why organizers in those communities spent months carefully preparing families, explaining the importance of the count and its potential impact -- about $440 billion in federal grant dollars are tied to the results nationally, not to mention the shape of voting districts that can determine everything from county commissioners to congressional representatives. Yet in April, as the deadline for returning those forms arrived, organizers learned that the documents had never been mailed. Census workers instead planned to go door to door in the colonias.

"It was the craziest, worst strategy they could have thought of," said Armando Garza, a city councilman in San Juan, Texas. "People in the colonias don't answer the door to strangers or people with federal badges."

Garza and a dozen others from the community met twice with census officials -- including Robert Groves, head of the bureau in Washington, D.C. -- to challenge the plan and implore officials to take another route. Hiring colonia residents to deliver the forms, for example, might at least put a familiar face on the government's questions, they said.

But those suggestions were rebuffed, and, in the end, an estimated 95 percent of colonia residents -- about 300,000 people -- never received their forms. A few spoke in person with enumerators from the Census Bureau, but most were never seen at all.

"We had so many people calling us, saying 'I haven't gotten that form, and I want to be counted,'" said Mike Seifert, a leader in the Rio Grande Valley Equal Voice Network. "It was just a perfect disaster."

To Ann Cass, executive director of Proyecto Azteca in San Juan, Texas, a local nonprofit that helps families build their own homes in the colonias, the entire procedure smacked of incompetence. "Probably there's a dash of racial bias, too," she said. "Assumptions that people in the colonias don't count -- and, if they don't count, we don't need to count them."

Raul Cisneros, a spokesman for the Census Bureau, said his office had made unprecedented efforts to get an accurate measure, establishing 1,200 partnerships with community groups in the region and hiring 30 local residents to help with face-to-face counting.

"We visited 47 million households across the country," he said. "We want to get to everybody. Homeless people -- everyone. We went into homeless shelters, went into tent cities. We went into rural Alaska."

Central to last year's effort was a vow from Washington, D.C., that the bureau would work with community groups -- such as those in the Equal Voice network -- to ensure that even the hard-to-count were noted. But Seifert, Garza and Cass say that mixed signals and conflicting information left them with the distinct impression that their input was not welcome.

"It was really about race and partisan politics," said Mike Sayer, an organizer in Mississippi who traveled to Texas to work with community groups there. "The Census Bureau officials didn't want to be seen as working intimately with 'them folks' -- or rather, us folks -- who are identified very clearly with Democratic politics."

Sayer, who helps organize poor families in the Mississippi Delta, has seen it all before. In his home state, whole neighborhoods go uncounted, he said, and the reverberations can last for years. A report by Pricewaterhouse Coopers found that undercounts in the 2000 census cost Mississippi about $12.5 million in funds for Medicaid, education and other federal programs.

In Texas, the 2000 census missed about 373,570 people, resulting in $1 billion lost to state coffers. Officials estimate that each uncounted person costs a community between $3,000 and $10,000 in government monies.

This year, Texas did only slightly better. Legislators estimate that census workers missed about 225,000 people in Hidalgo County, including 60,000 uncounted in the areas surrounding McAllen and Brownsville.

The border region is the fastest growing -- and youngest -- in the nation, struggling with dire poverty and a population increase of about 20 percent in the last decade. A recent report ranks Texas as worst in the nation for its rate of uninsured children and for the number of people over 25 without a high school diploma. Meanwhile, the state is contemplating draconian budget cuts, and more federal dollars following into some 185 programs calculated on a per capita basis could have been an important stopgap.

"Their bad work -- they're not going to suffer for it," said Seifert. "But, down here, it's a different story. The most vulnerable of America will be uncounted if you don't do the census right."

Aside from money, census undercounts can drastically affect political representation by triggering the redrawing of electoral districts. So across the nation, inaccurate population figures could affect elections for thousands of government offices over the next 10 years -- everything from school board members to state representatives. The Rio Grande Valley, for example, stands to gain two congressional seats and, depending on the final numbers, two in the state Legislature.

Problems extend beyond rural areas. Chicago organizers and legislators say 200,000 people were missed in the Windy City last year -- most of them African American -- and Illinois is now at risk of losing a congressional seat.

The Census Bureau has a standard procedure for handling such disputes and concedes that in addition to undercounting some groups, it over counts others -- most of them wealthy and white. These disparities take time to sort out -- often more than a year -- while voting district reapportionment cannot wait. In 2000, after receiving claims from 1,080 areas, the bureau revised its total national population by only 2,700 people.

"That's one one-thousandth of a percent," said Census Bureau spokesman Cisneros, in Washington, D.C. "The indicators we have so far for last year are that we're all good. The count came in very close to our estimates."

For Garza, the San Juan city commissioner, the import is clear: "It's huge for our area, which is neglected by the federal and state governments," he said. "If the light company and the IRS can use the mails to find people in the colonias, how come the Census Bureau can't?"

(Photo of Maria Lopez in front of her home in the Cameron Park colonia courtesy of Michael Seifert.)