It's official: The South's Latino communities are the fastest-growing in the country. On March 24, the final batch of 2010 Census data was released, and the results were striking: The number of U.S. residents identifying as Hispanic rose 43 percent over the past decade, accounting for 56 percent of the nation's total population increase -- a rate of growth far beyond earlier Census projections.

The states with the fastest growing Latino/Hispanic communities were almost all in the South. According to the Pew Hispanic Center [pdf], nine of the 12 states with the greatest increase were in Southeastern states. In seven of those states, the population had more than doubled. 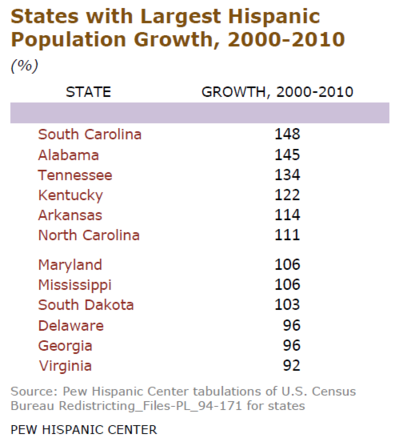 In many Southern states, Latino communities are relatively new -- and the Census data shows that in these places, they remain a small share of the overall population.

But rapid growth has propelled states like Georgia and North Carolina to the top of the list of states with the largest overall Latino/Hispanic communities. 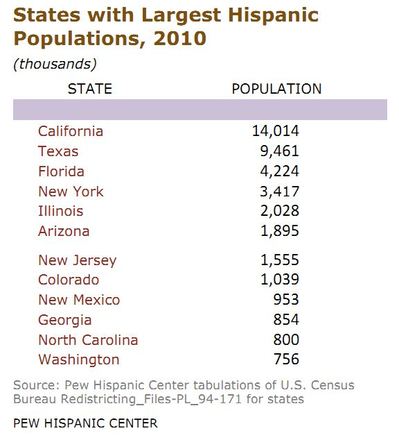 New immigration is having a profound impact on all aspects of Southern life, from education policy to the labor makeup of entire industries.

With Latino communities growing more quickly than most Census and political analysts imagined, there's growing discussion of how it will impact Southern politics, even as early as the 2012 presidential race.

The political clout of the South's Latinos is already being seen in one way: More than any other factor, the growth of Hispanic communities is the reason four Southern states will gain eight Congressional seats and Electoral College votes. However, the lawmakers that will redraw the political lines in their communities will be Republicans.

The rapid changes could also change the political map for the 2012 elections.

As Ron Brownstein argued in a widely-circulated National Journal piece last week, "the next America is arriving ahead of schedule," and demographic changes that were expected to take years to unfold could change presidential and Congressional races by next year. He writes:

[T]he key question for 2012 may be whether Republicans can increase their advantage among whites enough to overcome what's likely to be a growing share of the overall vote cast by minorities, who still break preponderantly for Democrats. In Florida, Georgia, Nevada, Virginia, and other key states that have experienced substantial minority growth, a National Journal analysis shows that Obama can win next year with a stunningly small percentage of the white vote--if Democrats can translate the minority-population growth into commensurate increases in the electorate.

Brownstein notes that in Georgia, North Carolina and Virginia, Latinos now make up one out of 12 voters; when combined with the also-growing African-American and Asian populations, this has led to situations like Georgia, where the "minority" adult population has spiked to 41 percent.

All of which means that President Obama would need fewer white voters to be competitive in key Southern states, which is good for Democrats given the 2010 election backlash and the his low poll numbers among Southern whites.

Jim Messina, Obama's re-election director, recently said these demographic changes put states like Georgia on the Democrats' 2012 target map. But as Aaron Blake at The Washington Post points out, it's an uphill climb. Only 23 percent of Georgia's white voters chose Obama in 2008 (compared to 35 percent in North Carolina), and Democrats don't have a lot of infrastructure -- at least not yet -- to translate demographic shifts into political victories.

But these superficial moves can't hide the larger reality: The Latino South is rising, and will decisively shape Southern politics well into the future.