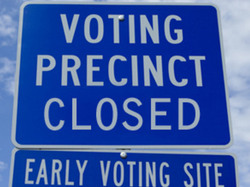 Eyes firmly planted on the 2012 elections, Republican state leaders across the South and country continue to push a host of bills aimed at restricting voting access and shaping who casts ballots next year.

As Facing South has been reporting, GOP leaders in Florida, North Carolina, South Carolina, Texas and other key states -- after campaigning largely on economic issues -- have made a top priority of passing measures that would shorten early voting, require voters to show photo ID at the polls, limit who can register and mobilize voters, among other measures that could have a big impact in close races.

In Florida, Gov. Rick Scott is poised to sign HB 1355, which reduces the number of early voting days from 14 to six, prohibits those who have moved from updating their address at the polls, and imposes new restrictions and penalties on third-party voter registration groups.

The bill has already provoked protests in Miami-Dade County, where election officials cancelled early voting days for their mayoral primary in anticipation of the bill becoming law.

In North Carolina, a similar bill to slash early voting days by a week narrowly passed in the house on Wednesday, 60-58. Republicans argued the bill would save money, although N.C.'s election chief responded by saying that it would end up costing the state more by increasing the workload on officials.

S.C. Department of Motor Vehicle records show that 178,000 state voters lack a photo ID; in some counties, more than 10 percent don't have the required identification.

This week in Texas, the house also passed its final version of a bitterly-contested photo ID law. Gov. Rick Perry (R), who early this year said voter ID was part of his "emergency" legislative agenda, is expected to quickly sign the bill into law.

Although much of the media coverage of the bills has been of the "he said/she said" variety, the timing and urgency of the GOP push is hardly a mystery. Several studies, like an analysis of voting records this spring by Democracy North Carolina, have shown that African-Americans, Latinos/Hispanics, the elderly and Democrats in general less likely to have photo ID.

Similarly, in 2008 Democrats and the Obama campaign relied heavily on early voting and get-out-the-vote efforts from third-party groups (including the much-maligned ACORN) to win key battleground states.

In 2012, changing the rules of the voting game could make all the difference.