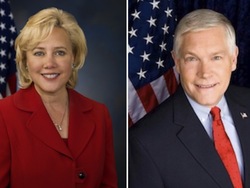 The Environmental Protection Agency issued a new rule this week requiring power plants in 27 states in the eastern half of the U.S. to cut smokestack emissions in order to protect the public from health-damaging smog and soot pollution.

But two lawmakers from Southern states where big polluters constitute a powerful political force are already trying to kill the regulation.

"No community should have to bear the burden of another community's polluters, or be powerless to prevent air pollution that leads to asthma, heart attacks and other harmful illnesses," said EPA Administrator Lisa P. Jackson.

According to EPA's analysis, the regulation will cost $800 million a year and bring up to $280 billion in annual health benefits. Many of the plants covered by the rule have already begun investing in pollution-control technology as a result of other federal and state laws targeting power-plant emissions.

But Sen. Mary Landrieu (D-La.) and Rep. Pete Sessions (R-Tex.) (in photo above) are circulating letter asking EPA to withdraw the new rule, citing concern over its economic impact, the Washington Post reports.

Landrieu receives a significant amount of campaign funding from dirty energy interests affected by the new rule. Over the course of her career, oil and gas concerns have been Landrieu's second-biggest industrial donor after lawyers, contributing $807,844, according to OpenSecrets.org. Electric utilities also rank among her top 10 donors, having contributed $519,090 to her campaign. Sessions in turn has received $682,164 from the oil and gas industry and $234,405 from electric utilities

While Louisiana relies more heavily on natural gas than coal to generate power, Texas has 19 coal-fired power plants -- more than any other state. The Lone Star State has resisted federal efforts to force it to clean up its coal plants, with Gov. Rick Perry, a GOP presidential hopeful, holding up the EPA's pollution rules as a violation of states' rights.

In a statement issued yesterday, Perry called the EPA's rule "another example of heavy-handed and misguided action from Washington, D.C., that threatens Texas jobs and families and puts at risk the reliable and affordable electricity our state needs to succeed."

Duke Energy's money is on a GOP-controlled U.S. Senate