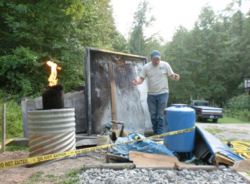 The flaming drinking water well at a home in eastern Kentucky's Pike County first came to public attention back in May, thanks to a report by a local TV station.

WKYT visited the home of Calvin and Denise Howard on Big Branch Road, where the Howards reported that the water, which runs orange and black, burned their skin when they bathed. They also said that Excel Mining, the operator of a nearby coal mine, had offered to install a water filtration system -- but only if the residents signed a liability waiver.

The Howards refused the company's offer -- and when WKYT checked back in July, the flames that had been just about to the top of the well were shooting out at least a foot and a half.

Since then, the Howards have filed a lawsuit [pdf] over the contamination. In addition, environmental advocates have gotten involved, arranging for the delivery this week of clean water to 13 area families amid inaction by the company and state environmental regulators.

"In all my 20 years of working on water quality problems, I have never seen a drinking water well catch on fire and burn continuously for days on end," says Donna Lisenby of Appalachian Voices, who with Kentuckians for the Commonwealth has arranged for the delivery of bottled water from Nestle and Keeper Springs Natural Spring Water, a company founded by environmental advocate Bobby Kennedy Jr. that gives 100 percent of its profits to clean-water causes.

According to the lawsuit, the trouble for the Howards began back in late January when they started hearing explosions beneath their home. About the same time, their well water turned gray and took on an offensive odor. Around May 1, the well exploded into flames, destroying the well house. It's burned continuously ever since.

Earlier this month, Ted Withrow, a former regulator with the Kentucky Division of Water who now works with the grassroots citizens group Kentuckians for the Commonwealth, and KFTC activist Sue Tallichet visited the community, where residents confirmed the water contamination. Residents also reported mysterious health problems they feared could be connected to the poisoned water, including a teenage girl's hair falling out and a boy vomiting blood.

The Kentucky Department of Mining Reclamation has investigated the burning well and confirmed that it "is creating an environmental and public safety hazard." At that point, the company began providing bottled water to the Howards, but other impacted families did not get any assistance. The Howards have been advised to evacuate their trailer home but can't afford to do so. The lawsuit seeks compensation for their replacement housing and their water.

"Based on my direct, firsthand experience with contamination of water by coal operations, I am deeply worried about the safety of the drinking water of these families," says KFTC's Withrow.

The water contamination along Big Branch Road illustrates a larger problem facing Kentucky: the coal mining industry's abuse of communities and regulators' failure to protect them from harm.

The Pike County situation is unfolding against a backdrop of coal company lawlessness and regulatory inaction in Kentucky. Back in June, an alliance of environmental groups including Appalachian Voices and KFTC sent notice-to-sue letters to two mining companies after discovering they had exceeded their pollution permit limits more than 4,000 times in the first quarter of this year alone.

The companies targeted by that action are International Coal Group, which is owned by Arch Coal of St. Louis, one of the world's largest coal companies, and Frasure Creek Mining, a subsidiary of West Virginia's Trinity Coal, which is owned by India's Essar Group. They are the largest producers of mountaintop-removal-mined coal in Kentucky.

The watchdogs notified the same companies last October of their intent to sue over more than 20,000 violations of the Clean Water Act, including falsification of pollution monitoring reports. But Kentucky's Energy and Environment Cabinet stepped in at the last minute and fined the companies a total of just $660,000 -- less than 1 percent of the maximum fine that could be imposed under the law. Environmental advocates denounced the state's action as an "ineffective, choreographed sham."

Excel Mining, the mine operator implicated in the burning-well situation, is owned by Oklahoma-based Alliance Resource Partners, among the largest coal producers in the eastern United States. Alliance reported record profits in 2010, with a 67.1 percent jump in net income over the previous year to $321 million.

The company landed in the spotlight last year when a roof collapsed at its Dotiki Mine in Hopkins County, Ky., killing two miners. News reports after the incident revealed that inspectors from the Kentucky Office of Mine Safety and Licensing issued 31 orders to close sections of the mine or shut down equipment because of safety violations between January 2009 and the time of the collapse, according to Sourcewatch. Reporters found that the company received a total of 649 citations in 2009 alone.

In addition, Alliance was involved in a 2009 controversy over the firing of the director of Kentucky's Division of Mine Permits. Ron Mills' termination came after he refused to issue about a half-dozen mine permits -- most requested by Alliance -- because they failed to comply with federal and state laws. Mills' denials were ultimately overruled by higher state officials.

Joe Craft, the president of Alliance Resource Partners, is a major political powerhouse. He has contributed over $150,000 at the federal level over the past decade, including $10,000 to the Republican Party of Kentucky; $17,500 to the Kentucky State Democratic Central Committee; $4,600 to U.S. Sen. Mitch McConnell (R); and $2,300 each to Barack Obama (D) and Mitt Romney (R), according to the Center for Responsive Politics' OpenSecrets.org database. The company's political action committee has also invested hundreds of thousands of dollars in politicians' campaigns -- $193,665 in the 2010 election cycle alone.

Craft and others affiliated with the company as well as Alliance's PAC are also major donors at the state level, according to the National Institute on Money in State Politics' FollowtheMoney.org database. Alliance Coal employees were among the biggest campaign donors in Kentucky's primary election this year, together with their spouses contributing a total of $60,000 to three candidates, WBKO reported last month.

And in 2009, Craft organized a group of donors to pay for a new $7 million "Wildcat Coal Lodge" to house the University of Kentucky's basketball players on campus -- a move that sparked considerable controversy and led noted writer and environmental activist Wendell Berry to pull his personal papers from the school's archive. While the university's sports teams are known as the Wildcats, "wildcat coal" also refers to coal that's mined illegally.

Meanwhile, residents along Big Branch Road are hoping to connect to a clean municipal water source -- but price is a concern. Pike County officials have said it could cost as much as $150,000 to connect them to their existing water lines. The families have said they would pay to connect to closer lines in nearby Martin County, but that could take at least three months.

(Photo of Calvin Howard standing next to his burning well and destroyed wellhouse by Appalachian Voices.)