This week, North Carolina election officials announced they were investigating an anonymous flier targeting five candidates in the contentious race for Wake County school board. 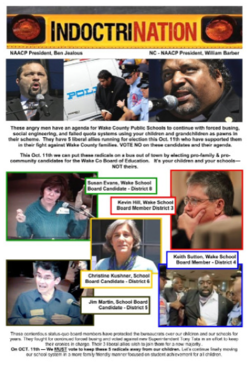 The flier explicitly calls for voters to take action on Election Day, stating "We MUST vote to keep these five radicals away from our children."

That led candidate Martin to file a complaint with the N.C. State Board of Elections on Sept. 13, because the flier would need to be reported as a campaign expenditure if it cost more than $100 to produce and distribute. The school board elections will be held October 11.

As of this writing, officials had yet to identify the source of fliers. But Facing South has found they may be linked to fundamentalist activists who believe Christians should completely abandon public schools.

The distinctive header at the top of the Wake County flier is identical to the name and images used by "IndoctriNation: Public Schools and the Decline of Christianity in America," a documentary film scheduled to be released in October 2011.

On the list of the film's "sponsors," the top entry is Exodus Mandate, an anti-public school group based in South Carolina that is unequivocal about its mission:

Exodus Mandate Project is a Christian ministry to encourage and assist Christian families to leave government schools for the Promised Land of Christian schools or home schooling. It is our hope that this fresh obedience in educating our children according to Biblical mandates will prove to be the key for revival in our families, churches and nation.

Other leading sponsors include the Christian Liberty Academy School System, Robinson Curriculum and Wisdom's Gate Ministries, which sell curricula and other materials for Christian right home-schooling - and stand to directly benefit from the film's agenda.

"IndoctriNation" has a strong North Carolina connection: One of the two lead producers is Joaquin Fernandez, a "veteran producer/director of documentaries, television commercials, and educational and marketing videos" who lives east of Raleigh, N.C.

Both Fernandez and his co-producer, Scottish-born Colin Gunn, have strong ties to the religious right. Fernandez's bio lists him as a "media consultant" for Exodus Mandate, which recently issued an "emergency call to ministries, churches, pastors and families to a massive exodus of Christians from public schools."

With his brother Euan, Gunn runs Gunn Productions LLC, whose recent videos include "Shaky Town: The Gospel Truth about Homosexuality and the 'Tolerant' City of San Francisco," and "The Monstrous Regiment of Women," which "goes all out to demolish the feminist worldview."

Last fall, Fernandez and Gunn finished a promotional tour that began in Texas and ended in Wake Forest, N.C.

Fernandez, for his part, sees IndoctriNation's agenda to be in line with the conservative forces battling over Wake County's schools. On the blog Called2Action, Raleigh religious right leader Steve Noble -- a fierce advocate for the Republican school board candidates in Wake County - asked his readers "Should Christians pull their students out of government schools?"

Noble answered: "I say yes." After a contentious series of comments, Fernandez closed out the thread by inviting readers to a screening of IndoctriNation in Raleigh: "Come out and watch the film with some of the cast and crew."

UPDATE 9/19: Facing South contacted IndoctriNation producer Joaquin Fernandez about the fliers. Mr. Fernandez emailed a response, in which he said:

We did not have anything to do with the flier and don't know who took the image, I assume, from our film's website - they did so without our knowledge or permission.

The N.C. State Board of Elections has yet to identify the source of the fliers. According to news reports, the fliers appeared online as a Facebook post by someone using the identity "Rino Hunter." "Rino" refers to "Republican In Name Only," a phrase used by conservative activists to describe GOP politicians they view as too moderate.

The "Rino Hunter" account has since been deleted, but a cached history shows the person using that identity posted several times on the Facebook page of the Greater Garner Republican Club and was a fan of the Club's page.

Whoever ends up being responsible, it seems clear they were, at the very least, influenced by the IndoctriNation documentary and its critique of public schools.

There are other connections between the Wake County elections and the Christian right anti-public school movement. For example, Ron Margiotta, the school board chair, was an early adviser of Called2Action, whose leader Steve Noble advocates Christians fleeing public schools.

Which raises the question: Why are people who see little value in public schools seeking leadership positions in these institutions?

Want to be an election watchdog? (updated)