One question we've been asked: Just how much money did Pope's network spend, and how did they spend it, in the 2010 Republican capture of North Carolina's legislature? Mayer's piece, citing the Institute for Southern Studies, says Pope's network targeted 22 races, of which Republicans won 18. In a local TV interview, Pope insisted that he only backed 19, and his money had nothing to do with the GOP's victories. What's going on here?

The answer points to why Art Pope's political network is so complicated -- and influential.

Come election season in North Carolina, Art Pope has an unmatched network of money sources, groups and people at his fingertips to exert his influence. These include:


Pope often says that what he does is no different than liberal groups and the Democratic Party. In reality, there isn't any one person in North Carolina who orchestrates such a broad-ranging and mutually-supporting network of money sources and political operations. And it's that synergy -- which creates a powerful media echo chamber -- that gives Pope and his empire so much clout.

So back to the question: How much money did Pope's network really spend to help win over North Carolina for Republicans in 2010? Below is an updated chart by the Institute for Southern Studies that breaks down the numbers: 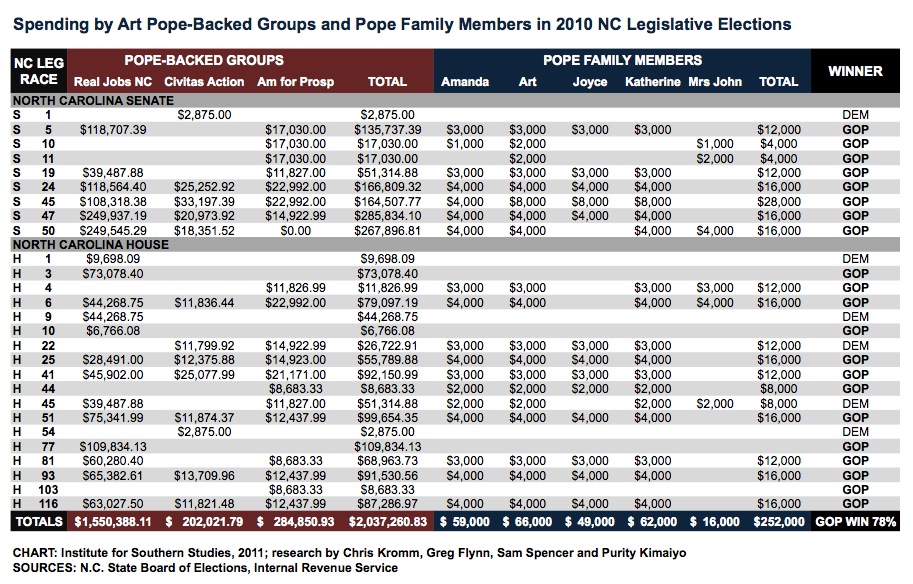 In all, Art Pope, his family, and the three main outside groups backed by Pope's Variety Wholesalers (and others) spent $2.29 million targeting 27 N.C. legislative races. Republicans won 21 of those contests, or 78%.

Why did Mayer's piece only talk about 22 races? Because in the Institute's original analysis, we took out the four races where Pope-backed groups spent less than $10,000 -- and Pope's family didn't contribute at all -- because they clearly weren't a top priority for them. At the time, we also didn't have complete data on one race, which we've now added.

The picture doesn't change much: It's clear that Pope, his family and the three groups backed by Pope targeted a handful of key races, flooding them with a level of spending that's high by state legislative standards. The spending by the three Pope-backed groups alone made up three-quarters of the outside spending in the 2010 state legislative elections.

More Pope Money: What Else is There?

But that doesn't account for all the state-level money Pope spent in 2010. (It also doesn't include Pope's spending on national politics; see Seth Cline's excellent piece at OpenSecrets for more). There were at least two other ways Pope and his network pumped money into the process:

* Pope's Variety Wholesalers gave $36,500 to the Republican State Legislative Committee, which led the REDMAP project aimed at winning over legislatures like North Carolina's in time for 2011 redistricting.

Last issue: How much of the more than $2 million spent by Americans for Prosperity, Civitas Action and Real Jobs NC in 2010 came from Pope, Variety Wholesalers or the Pope family foundation?

Short answer: It's impossible to know for sure, because so-called 501c4 groups, like Americans for Prosperity and Civitas Action, aren't required to disclose their donors. Federal and state campaign finance reports show that at least $470,000 of the money for Real Jobs NC, AfP and Civitas Action came directly from Variety Wholesalers.

Add the $36,500 the company gave to the Republican State Legislative Committee, and Variety's contribution grows to $506,500. Combine that with Pope family contributions to those races, and we come to a grand total of $758,500 in confirmed Pope-related spending.

There's also the fact that the Pope family foundation has given big money to the non-electoral, 501c3 wings of Americans for Prosperity and Civitas Action: the Americans for Prosperity Foundation ($2.2 million from the Pope family foundation) and the Civitas Institute ($8 million since its founding in 2005). By law, the money 501c3's share with their 501c4 sister groups can't be used for election-related purposes. But it can be used for a 501c4's general operating support, which in theory could free up money that is used during election season.

Pope and his defenders claim the money is beside the point: North Carolina went Republican in 2010 because that's what the voters wanted (see, for example, his interview with ABC WTVD after the New Yorker piece came out). It's undeniable: 2010 was a big GOP year, and change was in the air.

But such public sentiment doesn't happen by magic: Pope and his allies are being too modest when they insist their tens of millions of dollars in right-wing PR had nothing to do with it (and if the groups were so ineffective, Pope should ask for his money back).

In reality, the story of Pope's role in the 2010 North Carolina elections comes down to two questions: Would Art Pope, who prides himself on being a smart businessman, have really shoveled so much money into North Carolina races if he didn't think it was a worthwhile investment? And if the voters of North Carolina were naturally so inclined to vote Republican, why did his network believe it needed to spend nearly $2.3 million convincing them it was a good idea?