The U.S. Environmental Protection Agency has released the results of its first comprehensive look at the health of rivers and streams nationwide, and it finds that the South's waterways are in especially bad shape compared to those in other regions.

While the 2008-2009 National Rivers and Streams Assessment found that 55 percent of river and stream miles nationwide are in poor condition for aquatic life, that figure is 65 percent for those in the Southern Appalachians and 71 percent for the Coastal Plains ecoregion stretching along the Mid- and South Atlantic and Gulf coasts. The Western Mountain ecoregion is in the best shape, with only 26 percent of its waterway miles in poor biological condition.

"The health of our nation’s rivers, lakes, bays and coastal waters depends on the vast network of streams where they begin, and this new science shows that America's streams and rivers are under significant pressure," said Nancy Stoner, acting assistant administrator of the EPA Office of Water.

The following map from the report shows the breakdown for biological condition of rivers and streams in all nine ecoregions: 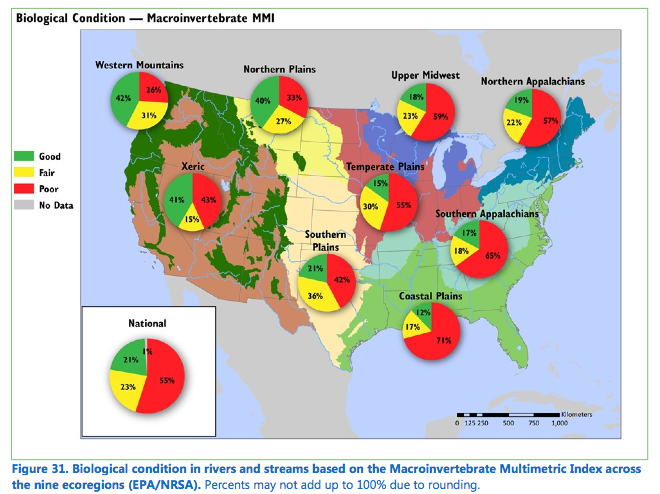 Released March 26, the assessment was based on an unprecedented water sampling effort undertaken by EPA and its state and tribal partners during the summers of 2008 and 2009. Field crews took random samples from more than 1,900 rivers and streams nationwide, and the results were compared to conditions at relatively undisturbed sites.

In addition to biological condition, which considers the presence of aquatic insects and other creatures and is the most comprehensive indicator of a water body's health, the survey also considered chemical stressors (phosphorus, nitrogen, salinity, and acidification), physical habitat stressors (excess sediment, lack of vegetative cover, disturbance of stream banks, and in-stream fish habitat), and human health indicators (neurotoxic mercury in fish tissue and bacteria levels).

The most widespread problem nationwide was nutrient pollution caused by phosphorus and nitrogen washing into waterways from cities, farms and sewage treatment plants. A big problem in the Mississippi River basin, nutrient pollution is implicated in the massive "dead zone" that forms each spring and summer in the Gulf of Mexico off the Louisiana and Texas coasts. Another major problem identified by the survey was development along rivers and streams leading to erosion and flooding, which in turn washes in more pollution.

In terms of human health threats, the assessment found that 9 percent of river and stream miles had levels of bacteria that exceeded standards set to protect human health. The problem was most severe in the Eastern Highlands, where 12 percent of stream miles were affected.

In addition, over 13,000 miles of major U.S. rivers were home to fish whose mercury levels exceeded safety standards for human consumption. (The survey did not consider mercury levels in smaller streams.) While some mercury enters the environment through natural processes such as volcanic activity and forest fires, other significant sources are hazardous waste incinerators and coal-burning power plants, which are of particular concern in the coal-dependent South.

The EPA's survey did not provide a breakdown for mercury contamination for the ecoregions, instead considering it only for the three major climatic regions -- the Eastern Highlands, Plains and Lowlands, and West. In addition, sampling was limited, as the report explains:

Research by the U.S. Geological Survey has found the highest levels of mercury contamination in the "blackwater" streams of North Carolina, South Carolina, Georgia, Florida and Louisiana. These water bodies have high levels of dissolved organic matter that helps turn elemental mercury deposits from power plants and other sources into especially toxic methylmercury that builds up in fish.

The EPA under President Obama has taken steps to curb mercury pollution. Last year it finalized clean air standards for industrial boilers, incinerators, and cement kilns to cut emissions of various toxics including mercury, and it is now in the process of updating mercury and air toxic standards for new power plants.

The EPA plans to use the water-assessment data to inform its decision making for rivers, streams and other waterbodies. It says the findings show that continued attention to water quality problems are needed at the national, region, state and watershed level.