Skip to main content
Join the voice for a changing South.
Donate Today
By Sue SturgisFebruary 10, 2014

This map and the one below are from "Voting Laws Roundup 2014" released by the Brennan Center for Justice on Feb. 6, 2014.

Before the 2012 election, there were numerous efforts in the states to restrict voting. But now the pendulum appears to be swinging in the other direction, giving voting-rights advocates cause for cautious optimism.

A new analysis from the Brennan Center for Justice at New York University School of Law found that hundreds of bills to expand voting access have been introduced in most states over the past two years.

"For years, partisans have moved swiftly to restrict the right to vote," says Myrna Pérez, deputy director of the Brennan Center's Democracy Program. "Now, given new momentum, there is a key opportunity to transform voting in America."

In the runup to the 2012 election, 41 states introduced 180 restrictive voting bills, while 19 states passed 27 measures making it harder to vote, the Brennan Center's analysis found. 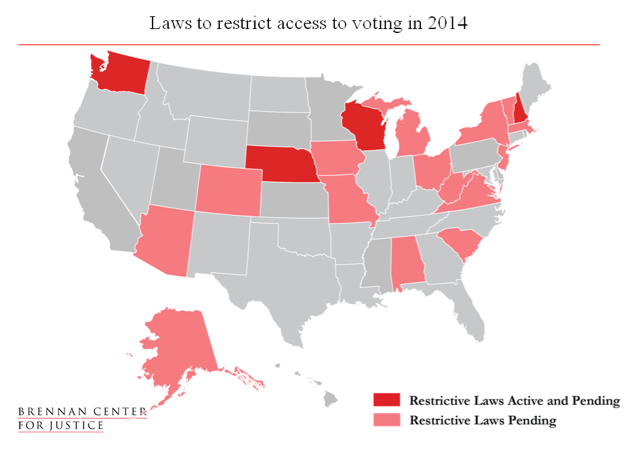 So far this year, 190 bills to expand voting access have been introduced in 31 states. That compares to 49 restrictive measure introduced in 19 states.

The shift in the states comes amid federal efforts to improve voting.

Last month, a bipartisan group in Congress introduced a bill to strengthen the Voting Rights Act. The key civil rights law had been weakened by a 2013 Supreme Court decision that threw out the formula for which jurisdictions have to get approval from the Justice Department before making any voting changes.

But the Brennan Center warns that voting rights advocates must remain vigilant, as restrictive voting bills remain a threat in 19 states, including the Southern states of Alabama, South Carolina, Virginia and West Virginia.

"We will continue to monitor efforts that make it harder to vote," says Pérez. "But it is encouraging to see so many important leaders embrace the need to fix voting."