Young voting activists gather on a Mississippi college campus in 2008. Four years later, Mississippi had the second-highest turnout rate among young voters after the District of Columbia. (BBC photo via Flickr.)

This week the Durham, North Carolina-based nonprofit MDC released its latest State of the South report highlighting how the American dream of intergenerational upward mobility is more elusive for young people born at the bottom of the income ladder in the South than anywhere else in the country.

The report focuses on young adults ages 15 to 24 and paints a picture of a region that has in recent years emerged from two recessions, is adapting to a global economy, and has disinvested in public services like schools, higher education, and Medicaid. The authors call on the South to build an "infrastructure of opportunity" that connects young people to education, support, and opportunities to build better lives.

There's another important tool for such an ambitious social building project that the report touches on briefly: the youth vote. In order to build a robust infrastructure of opportunity in communities across the South, young people need to have a voice in the debates and decisions that affect their lives.

The importance of young people voting was captured in the report's example of Northern Neck, Virginia, where opportunities for youth who stay in the area have been limited. The four-county region along the Chesapeake Bay has had a growing population of retirees moving to the area and exerting increasing influence over local priorities.

"The county governments respond to the people who vote and mobilize to make their opinions heard," the report says. "And in Northern Neck, that's usually retirees."

As a result, the region inadequately invests in the systems and policies to build strong, equitable schools and economies that young people can plug into and advance through.

Northern Neck is not unique in its low representation of young voters at the polls. Nationally, young voters have had that lowest turnout among all age groups as well. Since the voting age was lowered to 18 in 1972, less than half of eligible 18 to 24 year-old voters have typically turned out in elections, compared to voters age 30 and above whose turnout rate has hovered around 70 percent.

But recent elections show this pattern may be changing. The 2004 and 2008 elections saw an increase in turnout among voters age 18 to 24 from about 39 percent in 2000 to nearly 50 percent at the peak in 2008. Although this increase wasn't sustained through the 2012 elections, policy makers are likely to pay more attention to millennial voters -- those ages 18 to 34 -- in the future as they become the largest segment of the American electorate in the next few years.

Voters ages 18 to 29 are also the most diverse and most rapidly diversifying age group among American voters. In 2012, 42 percent of 18 to 29 year-old voters were non-white, growing from 26 percent in 2000. For the 30 and above group, the non-white population grew by only six percentage points over that period to 24 percent. Among younger voters, the largest minority group was Hispanic (18 percent of all young voters) and then African American (17 percent). 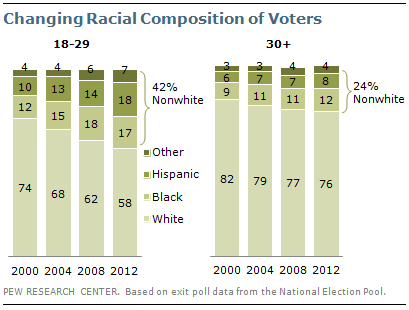 Getting all demographics of this young age group to vote may be a key to answering a question posed by MDC President David Dodson at the State of the South launch event earlier this week: How do we create an infrastructure of opportunity that supports growing African-American and Latino communities, especially given the South's poor track record of including them in the region's growth and prosperity?

Young people in the South are even more demographically diverse than their counterparts nationally: Half of Southern youth 15 to 24 were non-white in 2012, and the number is projected to grow in the future. 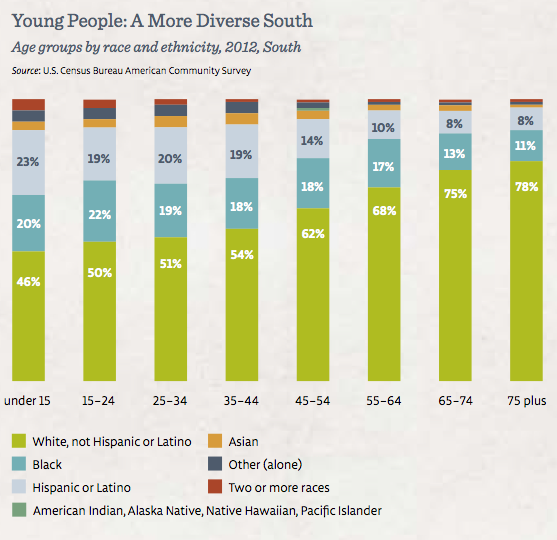 Southern states have a mixed bag of laws that affect how easy it is for youth to vote, but a major trend across the South that discourages youth voting has been the enactment of restrictive voter ID laws, including laws in North Carolina and Texas that don't allow a college ID to count as valid identification. A recent Government Accountability Office study of voter ID laws in Kansas and Tennessee found that passing voter ID legislation statistically decreased turnout among young voters as well as African-American voters in those states.

Some Southern states are enacting measures that would make it easier for young people to vote, including same-day registration, pre-registration of 16 and 17 year-olds, and online voter registration -- but others are rolling back those same measures. While lawmakers in Louisiana passed a law in 2014 allowing 16 and 17 year-olds to pre-register to vote beginning in 2015, North Carolina lawmakers last year passed a "monster" voting law that ended that same program in the state. North Carolina's law is also leading to the elimination of early voting sites on college campuses across the state.

The youth vote is an important piece of prioritizing and shaping an infrastructure of opportunity in the South. Through voting and other avenues for civic engagement, young people's voices need to be included in the debates and decisions that will affect the lives and their futures.

As young voter participation has grown, so have Southern states' efforts to curb it