After the 2014 elections, one could be forgiven for wondering: Are there any Democrats left in Arkansas?

In a once-tossup U.S. Senate race, Republican Tom Cotton coasted to victory with 56.5 percent of the vote over Democrat Mark Pryor. For governor, GOP candidate Asa Hutchinson beat Democrat Mike Ross by a similarly healthy margin (55.4 to 41.5). In the state legislature, Democrats lost further ground to Republicans, with the GOP gaining two seats in the state Senate and a staggering 13 seats in the House.

When Congress reconvenes in 2015, Arkansas' four-member U.S. House delegation will remain all-Republican as well, but digging into the 2014 election results reveals an interesting fact: The number of Arkansas voters who chose a Democrat to represent them in Congress actually increased from 2012 to 2014, despite this being a worse election year overall for Democrats.

In 2014, nearly a third of voters in Arkansas -- 31 percent -- pulled the lever for a Democratic candidate for the U.S. House. That was up from 29 percent of voters in 2012, but the results were the same: In both elections, zero Democrats in Washington to represent them.

A leading culprit in this mismatch between which party voters choose to represent them, and the actual number of representatives that are sent to Congress, is gerrymandering, where the majority party in state legislatures use the once-a-decade redistricting process to draw congressional maps to their benefit.

After 2010, Republicans -- especially in the South -- used their dominance in state legislatures to redraw lines that have proven to be especially effective in preventing Democrats from competing in U.S. House races. A Facing South/Institute for Southern Studies analysis after the 2012 elections found that the degree to which House Democrats were under-represented in the South was four times the national rate.

Facing South/ISS looked at the six Southern states where Democrats were most under-represented in 2012, and how they fared in 2014. The chart below shows the results between which party voters picked, how many seats each party could have expected had the results been more evenly distributed, and how that matches up with the actual 2014 election results (click on it for a larger version): 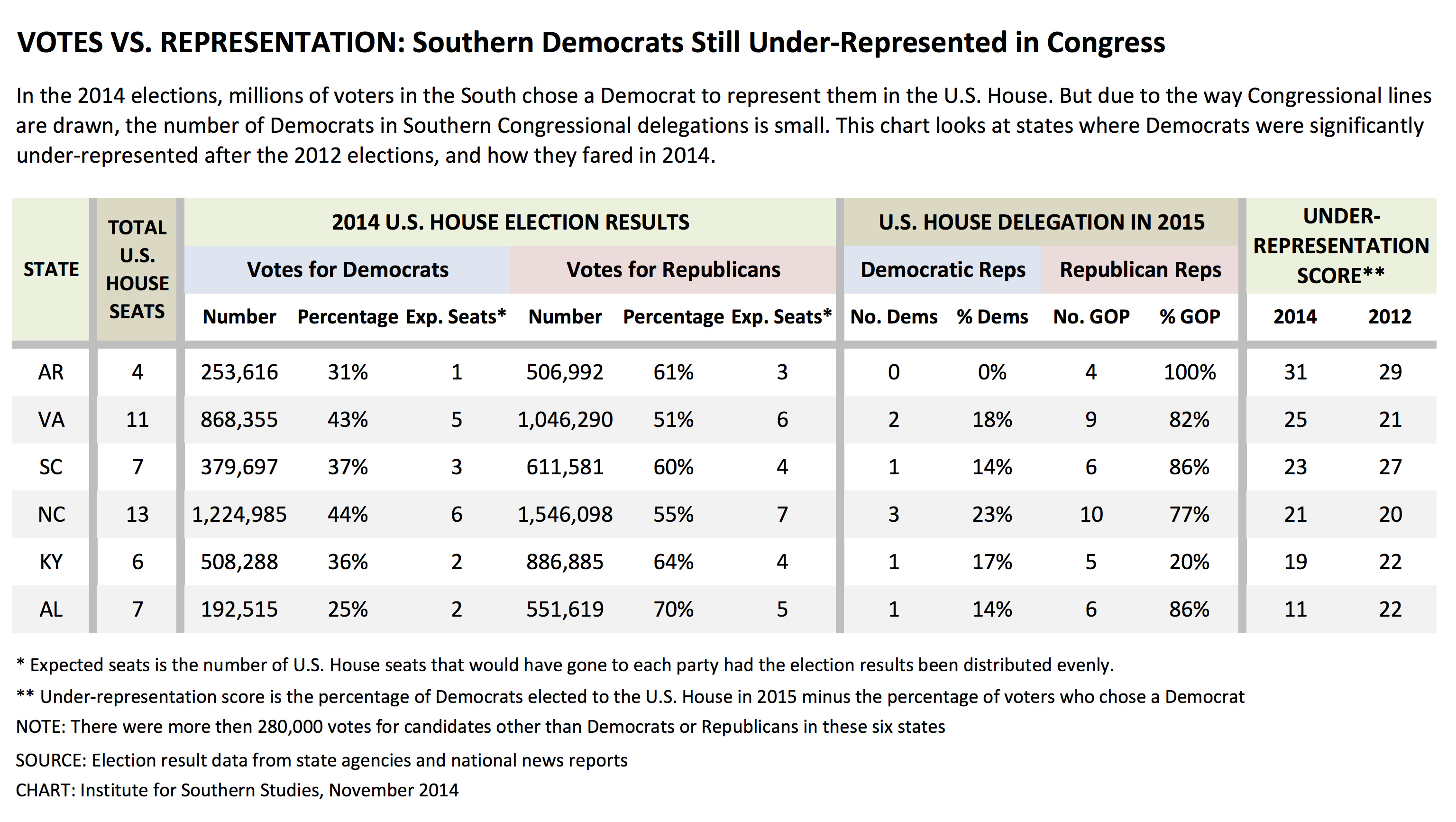 Arkansas again ranks as the state where Democrats are most under-represented in the U.S. House delegation. Theoretically, if the votes had been more evenly distributed, Arkansas voters would have sent at least one Democratic representative to Washington.

Kentucky, North Carolina, South Carolina and Virginia all continued to rank high for Democratic under-representation. In each state, at least 36 percent (Kentucky) and up to 44 percent (North Carolina) of voters picked a Democratic U.S. House member. Yet out of the 37 House members elected in those four states in 2014, only eight were Democrats -- a measly 19 percent.

In Alabama, the mismatch between Democratic votes and Democratic representation actually decreased between 2012 and 2014. But that was largely because the number of voters choosing a Democratic candidate plummetted from 36 percent two years ago to 25 percent this year -- in part because in two races Democrats didn't even field a candidate.

Altogether, across the six Southern states, Democrats would have claimed 19 U.S. House seats if they were divvied up by the overall vote totals. Instead, they'll be sending less than half that -- eight -- when the 114th Congress meets in January 2015.

As the many statewide races for governor and U.S. Senate in the South showed, Democrats can't chalk up all of their problems in Southern states to rigged political lines. But in races where the political lines do matter, in many cases Southern Democrats aren't extinct or endangered -- they're just underrepresented.

The South and "the Great Gerrymander of 2012"