With the South providing a third of the nation's Electoral College votes and experiencing a period of rapid demographic change, it would be short-sighted -- and counterproductive -- for Democrats to write off the region.

The Democratic Party's dismal showing in the 2014 elections caused progressives and the party faithful to look for answers, or at least for someone to blame. A handful of pundits decided the Democrats' problems could be traced back to one region of the country: the South.

The opening salvo came from Daily Beast writer Michael Tomasky, who penned an attention-grabbing story titled "Dems, It's Time to Dump Dixie." After summing up the South as a "reactionary, prejudice-infested place" and "one big nuclear waste site of choleric, and extremely racialized resentment," Tomasky concludes Democrats "should just forget about the place" and refuse to spend "a red cent down there."

As Tomasky no doubt hoped, his piece sparked wide debate, which caused him to double down with a follow-up piece -- drawing heavily on a report by the Institute for Southern Studies about gerrymandering in the South. While more tempered, his follow-up still concluded that "the Democratic Party is largely wasting its time (and indeed worse -- diluting its national brand) by trying to make inroads into the South."

But Tomasky missed the key point of that report, and other recent analysis by the Institute: that there is a strong opportunity for a Democratic and broader progressive revival in the South, but progressives just need a "Southern Strategy" -- a counter to the right's decades-old Southern strategy of racial division -- to make it happen.

Here are four maps that show why ignoring the South isn't an option for Democrats:

1. The South is too big to ignore. 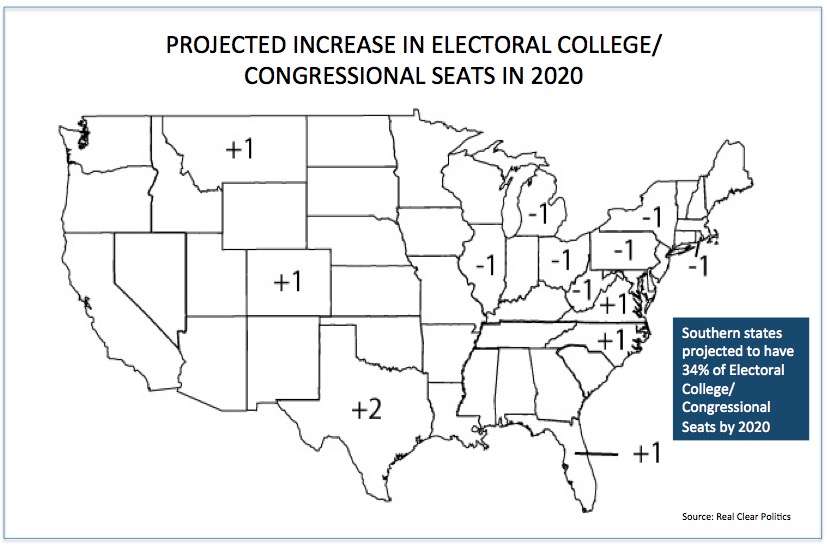 Democrats are struggling in the South, but it's even worse in other parts of the country. For example, while Democratic candidates for U.S. Senate lost by an average of 18 points in the South, they were walloped by an average of 26 points in states in the Great Plains. That's in line with past election results: President Obama's worst states in 2008 and 2012 (map below) were in the Great Plains, which Gallup surveys reveal are among the most conservative. But for some reason, we're never treated to post-Election Day screeds from Northern pundits about the Great Plains being a cesspool of "prejudice" and "resentment." 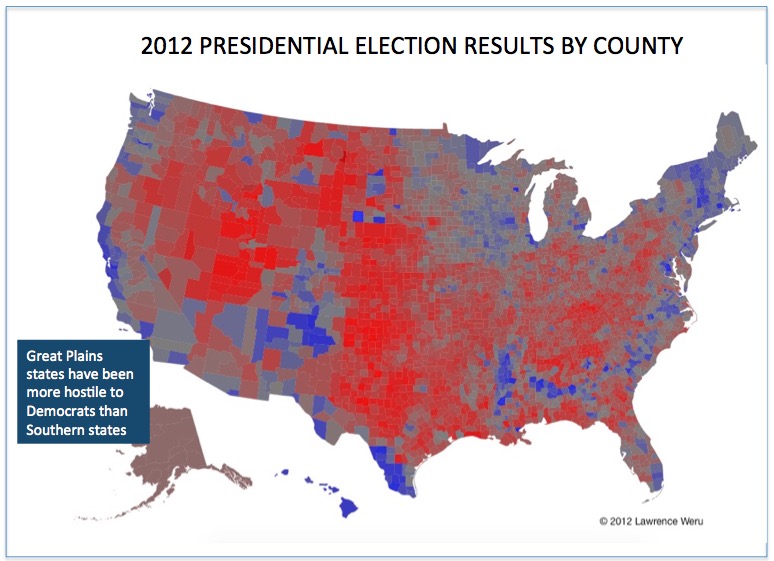 3. The South is home to the Black Belt.

Nearly half of all African Americans in the country live in 13 Southern states. And the share is growing thanks to a two-decade trend of return migration of blacks to the South, especially to Southern cities. If Democrats are committed to racial justice -- and their most loyal voting base -- can they turn their backs on the South? 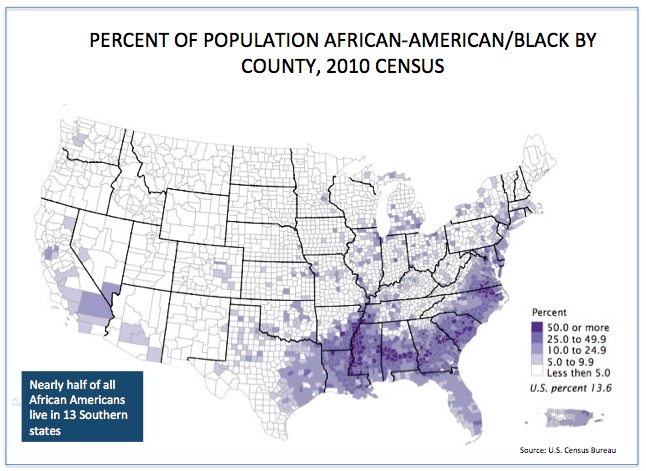 4. Demographics in the South are rapidly changing.

Demographics in the South are changing more quickly than in any other place in the country. In addition to an influx of African Americans, Southern states also have among the fastest-growing Latino and Asian communities. The South ranks at the top for both migration from other states and immigration from abroad. The number of counties in the South that are majority people of color is projected to double within a generation. Many of these emerging communities are still small with a sizable number of residents who are young, undocumented or otherwise not eligible to vote yet. But in many states, the numbers are reaching critical mass: A recent report by the Center for American Progress estimated that there are currently more than 7.3 million eligible but unregistered African-American, Asian and Latino voters in 11 Southern states [pdf]. This Emerging Electorate could be the foundation for growing progressive politics in the South -- but only if progressives have a presence in the region to organize them. 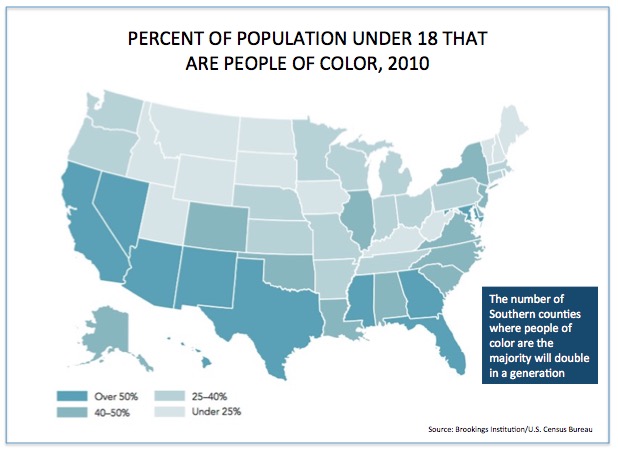 There is much more to object to in Tomasky's confused and contradictory rant. After announcing that Democrats should bypass the South, he back-pedals to allow that -- in presidential elections at least (don't those impact down-ballot races?) -- Florida, Virginia, North Carolina, Georgia and Texas could all be competitive in the not-so-distant future. The fact these states happen to account for 70 percent of the population in the region Tomasky wants us to "forget" about seems to escape him.

On a deeper level, Tomasky's piece reflects a broader tendency to make the South a scapegoat for the nation's social ills. Forget about Michael Brown, Eric Garner and racial violence outside the South; ignore Colorado Springs, mecca of the Religious Right; look away from the Southwest's vigilante border militias or Bundy ranch extremists in Nevada: In Tomasky's view, it's the Southeast that has uniquely violated our nation's "crucial secular values" of "tolerance, compassion, civic decency [and] trans-racial community."

It was just this menality that Malcolm X was responding to when, frustrated by those focused on racism in the South while ignoring racial tensions and injustices in their home states, he said: "Stop talking about the South. As long as you south of the Canadian border, you South."

But most importantly, Tomasky and others are missing a potentially monumental turning point in the South's history: a rapid and far-ranging period of demographic upheaval that is transforming one of the country's most politically important regions. Demography isn't destiny, though, and the potential of the Emerging Majority to shape the political direction of the South will only come to fruition if Democrats and progressives invest now in their own Southern Strategy for change.

INSTITUTE INDEX: Why the DOJ sued Texas over its new voting maps

The Voting Rights Act and the future of Southern politics