The North Carolina General Assembly is back in Raleigh for the 2015 long session and preparing to tackle a host of issues, including tax rates, school spending, the future of Medicaid and environmental standards.

* Election Spending: Money that special interests have spent directly and indirectly to elect state-level politicians in the 2012 and 2014 elections, based on analyzing thousands of state and federal campaign finance reports.

After analyzing both the election spending and lobbying power of special interests, Facing South/ISS produced a list of top "Tar Heel power brokers" — companies and other key players that have unique influence in the halls of state power.

1) DUKE ENERGY: The Charlotte-based utility giant, which merged with Progress Energy in 2012, tops the list of special interests in the state. Among the interests analyzed in the Facing South/ISS report, Duke ranked second in lobbying clout with a team of top-rated lobbyists that includes Dana Simpson of the firm Smith Anderson and former Raleigh mayor and state GOP chair Tom Fetzer. Duke also ranks among the top five for election spending, pouring more than $940,000 into political campaigns and independent committees in 2012 and 2014.

Duke Energy's political influence includes ties to top state officials including Gov. Pat McCrory, a former Duke employee. The company has been the subject of intense scrutiny, especially in the wake of the massive coal ash spill at one of Duke's power plants on the Dan River in February 2014. In 2013, Duke successfully pushed to insert language into a regulatory reform bill that eased coal ash cleanup requirements. After the spill in 2014, the state legislature passed a bill requiring coal ash cleanup at four of Duke's plants while leaving out 10 others, despite evidence that all of the coal ash pits are leaking pollution into the state's water supplies.

(Hover over graphic for more details about the top power brokers.)

2) NATIONWIDE: Ranking second among Tar Heel power brokers is Nationwide Insurance & Affiliates, one of the world's largest insurance and financial services companies. In the Facing South/ISS report, Nationwide ranked at the top for lobbying influence, hiring the three most influential lobbyists in the state. The Ohio-based company also spent more than $690,000 to help state candidates in the 2012 and 2014 elections, ranking seventh for political spending.

Like other insurance companies, Nationwide closely follows — and weighs in on — a wide range of policy measures taken up by state lawmakers. In 2013, for example, the company was one of several auto insurers that successfully sought to defeat a "Good Driver Discount Bill," which would have allowed insurers to bypass rate restrictions.

3) N.C. ASSOCIATION OF REALTORS: The nonprofit "Voice of Real Estate in North Carolina" ranks third among North Carolina power brokers in the Facing South/ISS analysis. The trade association's team of lobbyists ranks seventh in North Carolina for its influence with state lawmakers. The group spent more than $1 million on state-level elections in 2012 and 2014, ranking third in political spending. It donated more than $680,000 directly to candidates and PACs and spent another $383,000 in independent expenditures, mainly through its political arm, the N.C. Homeowners Alliance.

4) N.C. CHAMBER: The conservative-leaning business association and its affiliated groups rank fourth in the Facing South/ISS study, largely due to money spent on state elections. In 2012 and 2014, N.C. Chamber and its sister group, N.C. Chamber IE, injected nearly $1.5 million into state-level races for the legislature and higher courts. The Chamber, whose "cornerstone" members include Duke Energy and other top influencers in the state, also ranks 30th in lobbying clout.

5) N.C. BEER AND WINE WHOLESALERS ASSOCIATION: Perhaps surprisingly, the trade association representing beer and wine distributors comes in at No. 5, driven by its strong lobbying presence. The group has the third-most influential lobbying team in the Facing South/ISS rankings. The Wholesalers Association also spent more than $468,000 in 2012 and 2014 on state-level campaigns and committees.

Rounding out the list of top 10 Tar Heel power brokers are the Alliance for Access to Dental Care; AT&T North Carolina; Blue Cross and Blue Shield of North Carolina; State Farm; and the N.C. Association of Electric Cooperatives.

As a result, interests that may be known for their lobbying presence — like the pharmacy chain CVS CareMark, with the fifth-highest rated lobbying team — but haven't spent much on state elections don't score high in the overall power broker rankings. Conversely, a group like N.C. Advocates for Justice — the second-biggest spender on state elections among the groups analyzed in the study — is only 14th overall on the list of top brokers due to its perceived lower influence among current lawmakers, according to the latest N.C. Center for Public Policy Research survey.

The Facing South/ISS analysis also limited its study to interests that have both a significant lobbying presence and have spent at least some money on the 2012 and 2014 elections. That leaves out groups that have a strong lobby corps but don't spend on elections at all, like Business and Education Leaders for Smart Start and Jobs, and WakeMed Health and Hospitals. It also omits big election spending groups who don't lobby. During the last two election cycles, outside groups like Justice for All N.C., N.C. Families First and others have directly and indirectly funneled millions of dollars into state elections.

Click on the image below for a detailed series of interactive graphics that show the overall top Tar Heel power brokers, as well as breakdowns of their election spending and lobbying influence in the state. 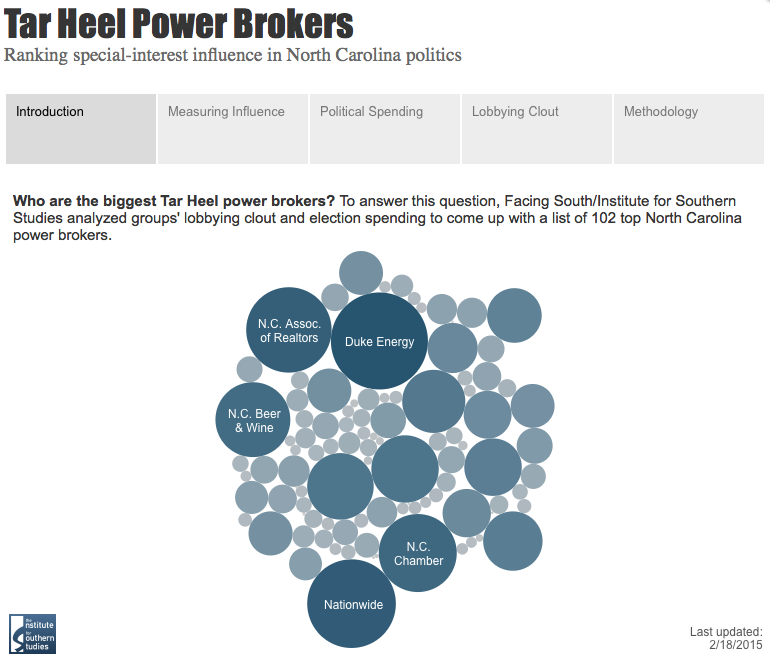 For interactive profiles of all of the power brokers analyzed in this report, click here.

Click here for a PDF copy of the full report. (CORRECTION: The N.C. Home Builders Association was left out of the original power broker rankings; ranked at 21st overall in political power, the group's appearance in the rankings is accounted for in this new version of the PDF report and the revised data visualizations. To read more about the group's contributions and lobbying, click here.)

(Research and analysis for the Tar Heel Power Brokers report by Alex Kotch and Brian Freskos, with assistance from Chris Kromm and Sue Sturgis. Graphics and data visualization for the project by Allie Yee.) 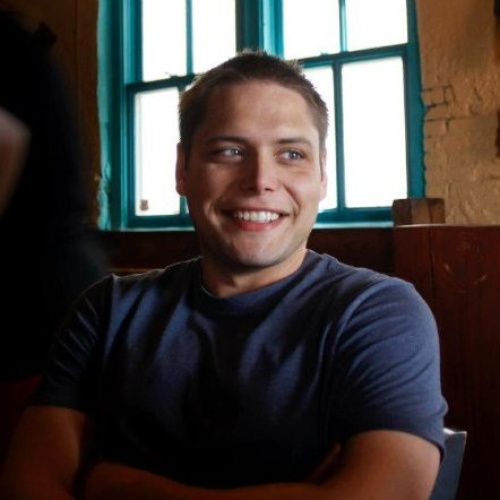 Brian was an intern with the Institute for Southern Studies.