Confederate apologists want us to believe Congress passed a law in 1958 giving Confederate veterans equal status to U.S. veterans. It's not true. (Photo by Mr.TinDC via Flickr.)

Since nine African Americans were gunned down last month in a Charleston, South Carolina church by a white supremacist who posed for photos with a Confederate flag, inspiring state leaders to remove the emblem from the statehouse grounds, a battle has raged across the South over other symbols of the defeated Confederacy.

Confederate memorials have been defaced from Texas to North Carolina, where Gov. Pat McCrory (R) this week signed into law a bill forbidding local governments from removing such memorials without the permission of state lawmakers. Meanwhile, the Atlanta City Council has officially called on Georgia Gov. Nathan Deal (R) to consider changes to the Confederate Memorial Carving on Stone Mountain.

The war over Confederate monuments is also being waged on social media — and some of what's being shared there evokes the old saying that in war the first casualty is truth.

One claim that's been circulating among Confederate apologists in recent weeks would have us believe that Congress passed a law in 1958 giving Confederate veterans status under law equal to U.S. veterans. It was made into this easy-to-share meme for Facebook and Twitter: 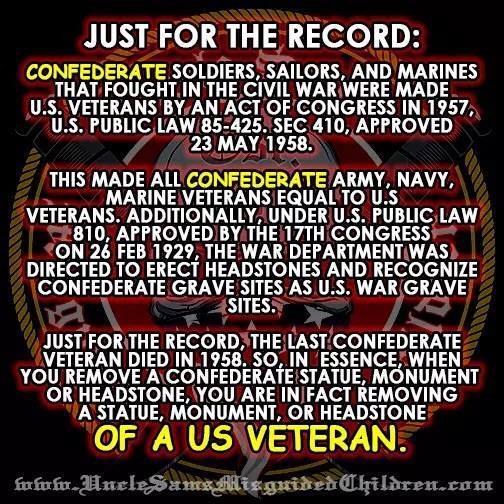 This claim was being made even before the violence in Charleston. The Sons of Confederate Veterans cited the 1958 law to make the case that all Americans should honor Confederate veterans. An undated official history of the Department of Veterans Affairs that covers the period up to 2006 goes so far as to claim that the law "pardoned" Confederate service members. A 1997 article in VFW Magazine also referred to the "congressional pardon" of 1958.

Since the Charleston massacre, the claim has resurfaced on conservative websites. In fact, it has circulated so widely of late that a petition has been launched calling on the Obama administration to take action to repeal the law.

But in fact, the law does not do what Confederate apologists say it does. It certainly does not "pardon" Confederate veterans, nor does it generally give them status "equal to" U.S. veterans.

"It is my understanding that the Senator from Louisiana [Mr. Long] is the author of the amendment providing for pensions for the approximately 1,000 widows of Confederate veterans," Sen. Lyndon Johnson (D-Texas), the Senate's majority leader and presiding officer, said during floor debate over the measure, according to the Congressional Record. "The bill was unanimously reported by the Committee on Finance. There is much interest in it, and I hope the Senate will act on it unanimously."

The "Senator from Louisiana" would be Russell B. Long, at the time a pro-segregation Democrat. The Congressional Record clearly shows there was no discussion on the Senate floor of Confederate "pardons" or any general change in the status of Confederate veterans.

The section of the law that Confederate apologists seem to be misconstruing is this one:

"For the purpose of this section" is referring to Section 432 of the Veterans' Benefits Act of 1957, which set pensions for widows of U.S. veterans of the Civil War; Section 433 of that act pertains to pensions of Civil War veterans' children. There is nothing in U.S. Public Law 85-425 or the law it amends that says anything about making Confederate veterans U.S. veterans or "pardoning" them.

As Confederate history researcher, author and blogger Andy Hall of Texas noted recently in a discussion at another blog when someone claimed that "Congress passed a law making any and all confederate soldier [sic] a US veteran" (emphasis Hall's):

If you're referring to the 1958 legislation, all it did was make Confederate veterans eligible for the same VA benefits as Union soldiers were. It did not make them U.S. veterans, make any other official change in their status, or extend any particular protections to graves or monuments.

It's really amusing how the same heritage folks who, generally speaking, have nothing but disdain and mockery for the federal government, cling desperately to this particular bit of legislation as an endorsement of their ancestors' integrity. Is your faith in them and their cause genuinely so weak that you have to have the official imprimatur of the U.S. government to justify their cause? Apparently so.

UPDATE: Two years after this story was first published, the fact-checking website Snopes.com also weighed in on the question of Confederate veterans' status under U.S. law. It concluded that claims Congress passed laws in 1929 and 1958 designating all Confederate soldiers as U.S. veterans and making it illegal to remove monuments to the Confederacy were "mostly false."

TIMELINE: The rise and fall of the Confederate flag