In a new report on state democracies by the Center for American Progress Action Fund, one of the main categories analyzed is states' ballot accessibility, with grades from A to F reflected here on a map available at the report's interactive website.

In the wake of the U.S. Supreme Court's 2013 Shelby County v. Holder decision weakening the Voting Rights Act, states including North Carolina and Texas passed onerous laws making it more difficult to vote, especially for people of color. While strict new voter identification requirements have gotten a lot of attention, other factors limit access to the ballot — and a new report finds access is especially restricted in the South.

Earlier this month, the Center for American Progress Action Fund (CAPAF), a progressive nonprofit policy institute based in Washington, D.C., released a report titled "The Health of State Democracies." The authors identify 22 factors characterizing healthy democracies and divide them into three main categories: ballot accessibility, representation in state government, and influence in the political system.

The report finds the South is the nation's least democratic region; it's home to the four unhealthiest state democracies and seven of the least healthy 10. 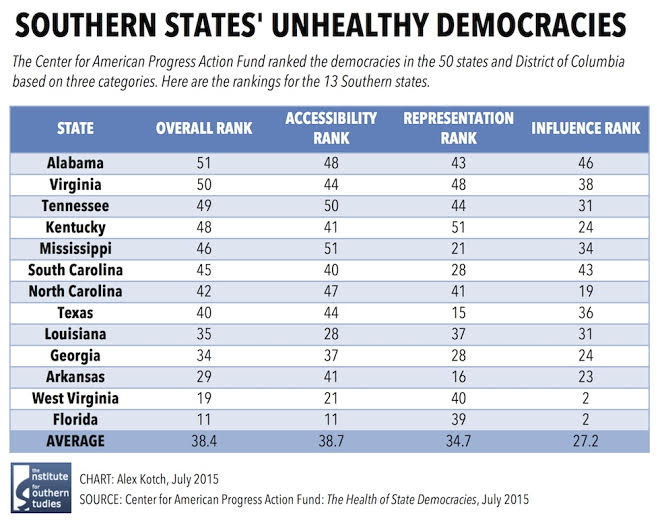 Some of the keys to ballot accessibility in the states:

Online voter registration. Registering to vote online is convenient, saves money and reduces error. Younger and overseas voters are most affected; 12 percent of California's voters in 2012 were under the age of 26, yet that group comprised 28 percent of online registrants. Those who registered online also turned out at higher rates. While 28 states offer online registration, 22 still do not, including seven in the South.

Early voting. In-person voting before Election Day, allowed in some form by 37 states and Washington, D.C., reduces Election Day lines, allows for more time to address registration errors, and is especially popular among African Americans. In 2008, 24 percent of African-American voters used in-person early voting compared to 17 percent of white and Latino voters. In North Carolina, 71 percent of African Americans who voted in the 2008 elections did so during early voting period, at a rate 20 percent higher than that of whites, according to the U.S. Department of Justice.

But since 2010,* North Carolina and seven other states including Florida, Georgia and West Virginia cut early voting periods, and five other Southern states offer no form of in-person early voting. CAPAF recommends that all states allow early voting and expand the hours for doing so to nights and weekends when the working poor are more likely to get to the polls.

No-fault absentee voting, which allows any registered voter to request a mail-in ballot, also expands voter access. It's permitted in 27 states and the District of Columbia but in only three Southern states. Twenty other states allow for absentee ballots with a qualified excuse.

Provisional ballots. These provide a way for voters who are not listed on the official voter rolls to cast a ballot and have it counted if they're deemed eligible to vote. Close to one-third of provisional ballots are ultimately rejected.

In a study of 2012 elections in 16 states, CAPAF's sister group the Center for American Progress found a significant correlation between the number of provisional ballots cast in a county and percentage of voters of color. Most Southern states are in the middle of the field in terms of provisional ballot usage.

The CAPAF report's authors recommend that all states provide same-day voter registration, which mitigates the need for provisional ballots by allowing voters who have moved but not updated their voter registration information to register on the spot and cast a regular ballot.

North Carolina eliminated same-day registration and out-of-precinct voting in 2013, resulting in thousands of disenfranchised voters. A study by the watchdog group Democracy North Carolina found that over 50 percent of the state's nearly 19,000 provisional ballots cast in 2014 were rejected; of those rejected, 2,344 would have counted under the previous same-day registration and out-of-precinct voting rules. Thirty-eight percent of those rejected ballots were cast by African Americans, who comprise only 22 percent of registered voters in the state.

The second broad category analyzed by CAPAF, the strength of representation in state government, examines the extent to which voters can affect their government. The authors found that states must improve representation considerably in order for their elected officials to accurately represent their states' demographics. The South did poorly in the representation category, with an average grade of D.

Felony disenfranchisement. This practice, which prevents people convicted of felonies from voting, disproportionately affects communities of color. According to the report, 4.4 million Americans are denied the right to vote due to felony convictions. One in 13 African Americans falls in this category, a rate four times higher than that of non-blacks nationally.

All 13 Southern states disenfranchise felons in the two most restrictive ways: Seven don't allow felons to vote during their prison sentences, parole or probation, while six continue to disenfranchise at least some felons even after they have served their sentences. Over 20 percent of African Americans were disenfranchised in Florida, Kentucky and Virginia in 2012 as a result of criminal convictions. Those three Southern states have the nation's highest felon disenfranchisement rates.

However, Virginia Gov. Terry McAuliffe (D) has restored the voting rights of over 5,000 felons in his state since becoming governor in 2014, continuing the re-enfranchisement effort begun by former Gov. Bob McDonnell (R). The policy change in Virginia has come as a part of a national, bipartisan movement to restore voting rights to ex-offenders. 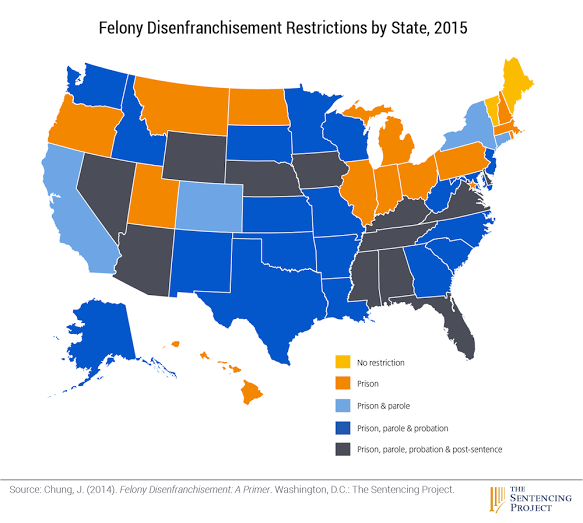 Other factors considered in the report's representation category include ballot initiative laws, gerrymandering of legislative districts to disproportionately favor one party, and representation of women and communities of color.

The third broad category examined in the CAPAF report, influence in the political system, considers factors such as campaign contribution limits for individual donors, public financing of elections, and campaign disclosure and judicial recusal laws. Southern states also performed poorly on this measure, with an average grade of D+.

Why does North Carolina want to discourage the youth vote?

New NC election law blocked as many as 50,000 would-be voters this fall

What the feds' voting rights lawsuit could mean for North Carolina