Skip to main content
Join the voice for a changing South.
Donate Today
By Alex KotchJune 10, 2016

Charles and David Koch's conservative political operation has bankrolled many of the highest-grossing politically active "social welfare" nonprofits formed since 2010. (Image from DonkeyHotey via Flickr.)

Between 1939 and 2010, 1,551 politically active "social welfare" nonprofits came into existence. Nonpartisan research organization MapLight, via its new Dark Money Watch project, has revealed that from 2010 to the present, 2,316 additional such groups were launched, a 150 percent increase in just six years.

Why have these politically active nonprofits spread so quickly? In January 2010, the U.S. Supreme Court ruling in Citizens United v. Federal Elections Commission allowed unlimited elections spending by individuals, corporations and unions. Many big donors prefer to hide their political contributions by giving to social welfare nonprofits, which are not required to disclose their donors and are supposed to spend less than half of their resources on political work. With a gridlocked Federal Elections Committee and an Internal Revenue Service reluctant to crack down against potential rule-breakers, some social welfare groups are getting away with extra political activity, often misclassifying it as "education."

High-profile groups such as Americans for Prosperity and American Crossroads have spent tens of millions of dollars on politics in recent years, but hundreds of other lesser-known groups have emerged since 2010 with the aim of influencing state and federal elections. In all, social welfare groups spent over $257 million on federal elections alone in the 2012 election cycle, the Center for Responsive Politics reports.

According to data provided to Facing South by MapLight, 650 new social welfare nonprofits were created in the South since the Citizens United ruling, and a number of these groups are tied to billionaire industrialists and conservative mega-donors Charles and David Koch. Before 2010, only 360 such groups existed in the 13 Southern states.*

This new crop of nonprofits raised more than $248 million in the most recent year for which data is available for each group, about the same amount as those that existed before Citizens United. Two of the groups in the MapLight data that took in the most revenue, the Office of Mortgage Settlement Oversight and the National Better Living Association, have not reported any political activity and are excluded from this analysis.

North Carolina saw the creation of 52 new social welfare groups after Citizens United, far fewer than in Virginia (155), Texas (153) or Florida (86), but they raised the most money — $85.7 million. However, much of that revenue went to the politically inactive Office of Mortgage Settlement Oversight. Other states where post-Citizens United social welfare nonprofits reported the highest revenues are Virginia ($70.7 million), Georgia ($34.5 million) and Texas ($32.9 million).

Many of the groups with the most revenue promote conservative causes, and at least three of those groups are part of the vast political spending network led by the Koch brothers.

"Dark money undermines our democracy by allowing special interests and foreign governments to influence our elections with total anonymity," Daniel G. Newman, co-founder and president of MapLight, told Facing South. "In a political system already struggling to reflect the values of everyday citizens, voters deserve at minimum to know whose money is affecting our representation."

A web of Koch-funded groups

Four Virginia-based trusts that are part of the Koch network rank high on the list of newly-formed social welfare nonprofits in terms of annual revenue:

* The LIBRE Initiative was formed in 2011 to promote limited government and free enterprise among Latino voters. It opposes the Affordable Care Act and a federal wage increase, and it supports "market-based" immigration reform but not a path to citizenship.

LIBRE is largely funded by other Koch groups. In 2014, it received $6.5 million — almost 70 percent of its revenue — from the Freedom Partners Chamber of Commerce, the Koch network's central bank. LIBRE took in over $150,000 in 2012 from another Koch group, the Center to Protect Patient Rights, and $693,000 between mid-2011 and mid-2012 from TC4 Trust, also part of the Koch network, through one of the Kochs' mysterious limited liability corporations, TDNA LLC.

* Another Koch-related group, YEM Trust, does business as Generation Opportunity and targets young voters. It receives most of its revenue from Koch-funded groups. It opposes government regulation, national debt and raising the minimum wage while hailing entrepreneurship and the free market.

YEM reported nearly $8 million in revenue in 2013, having received $5 million from Freedom Partners via another mysterious Koch company, TRGN LLC. The following year, Freedom Partners gave Generation Opportunity over $14.2 million. In the past few years, GenOpp has taken in money from TC4 Trust and the Center to Protect Patient Rights.

* Evangchr4 Trust, a Christian group based in McLean, Virginia, has been heavily funded by the T4 Trust and the Freedom Partners Chamber of Commerce since 2010. In 2013, the trust received over $3 million in revenue and doled nearly all of that total out to four other social welfare nonprofits including CitizenLink, an arm of socially conservative Focus on the Family, and Family Research Council Action, an arm of the FRC, labeled an anti-LGBT hate group by the Southern Poverty Law Center.

Among the other highest-grossing post-Citizens United social welfare nonprofits in the South:

* Founded in 2010 in Washington, D.C., and now based in Alexandria, Virginia, Ending Spending Inc. is a conservative social welfare group that took in $12.6 million in 2014 and is chaired by Joe Ricketts, a Nebraskan who founded stock brokerage firm TD Ameritrade and who owns the Chicago Cubs. Ending Spending and its super PAC sister group, Ending Spending Action Fund, which has reported far more on political expenditures, aim to limit the size of government.

* Based in Woodstock, Georgia, Tea Party Patriots Inc. was formed in 2009 but didn't receive its social welfare status until 2014. It took in $7.4 million that year, much of which went toward training state and local Tea Party coordinators, holding rallies, and hosting webinars and conference calls. The group shares services with the related Tea Party Patriots Citizens Fund, a super PAC that in the current election cycle has spent close to $200,000 supporting presidential candidate and Republican U.S. Sen. Ted Cruz of Texas. In the 2014 cycle, the PAC spent over $1.4 million benefiting conservative Senate candidates.

* Americans for Economic Freedom launched in 2013 in anticipation of former Texas Gov. Rick Perry's 2016 Republican presidential run. Based in Austin, Texas, the group states its aims of promoting "free and open markets" and stimulating entrepreneurship. It received $4.5 million in 2014 but doesn't appear to have made any political expenditures.

* On the liberal side, North Carolina Citizens for Protecting Our Schools, a group that promotes increased teacher pay, took in $3.8 million in 2014 and spent almost $512,000 on North Carolina state elections, mostly on ads attacking conservative legislative candidates. Two years earlier, the group spent almost $280,000 supporting liberal candidates for governor, state Supreme Court and the legislature. It has also given millions of dollars to other liberal political groups active in the state. N.C. Citizens is funded primarily by Washington, D.C.-based National Education Association and America Votes. While the group's website domain name has expired, it's still active, according to the State Board of Elections.

MapLight's data leaves out Carolina Rising, a North Carolina-based group formed in 2014 by now-state Republican Party Executive Director Dallas Woodhouse to boost former N.C. House Speaker Thom Tillis's successful U.S. Senate run that year. Carolina Rising is operating as a social welfare group, but it's not clear if the IRS has officially granted the group this status. It reported taking in $4.9 million in 2014 and spent nearly all of it on ads supporting Tillis, running afoul of the requirements for social welfare status.

Below is a table detailing the 20 highest-grossing groups. 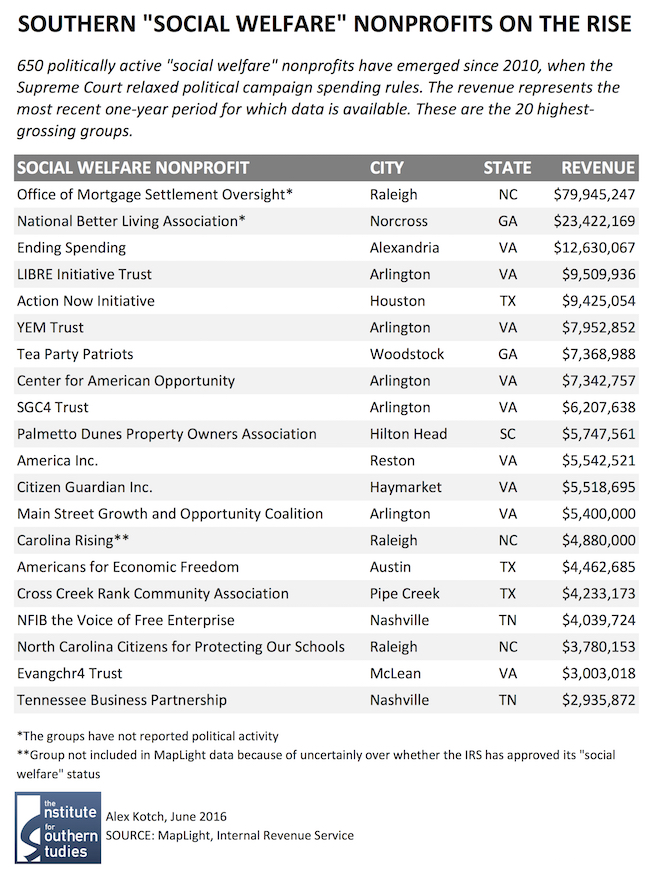 Secret-money groups, some with Southern ties, may have broken election laws

INSTITUTE INDEX: The money behind Americans for Prosperity

SPECIAL INVESTIGATION: Who's behind the 'information attacks' on climate scientists?