(This is the first of a two-part report about refugees and the 2016 election. To read part two, "Refugees stand up to anti-immigrant sentiment in the South," click here.)

Refugees have drawn big cheers at the 2016 Rio Olympics this summer, competing as part of the first-ever Refugee Olympic Team. Comprised of athletes who’ve fled war-ravaged homelands in Africa and the Middle East, the 10-member team was created as a symbol of hope for refugees worldwide and to bring attention to the ongoing global refugee crisis.

But in the U.S. South, the presence of refugees — and their potential future arrival — have been far more controversial, and the hot-button issue has found its way into this year's state and local elections.

The tone of the national debate over refugees was set late last year when, after the November terrorist attacks in Paris, Republican presidential candidate Donald Trump called for a ban on Muslims entering the U.S. But while Trump's rhetoric was particularly extreme, his were far from the only anti-Muslim and anti-refugee statements made by politicians.

Even as local agencies and officials urged openness, over 30 governors called on federal authorities to stop resettling refugees in their state. Among them were the governors of 10 of the 13 Southern states. 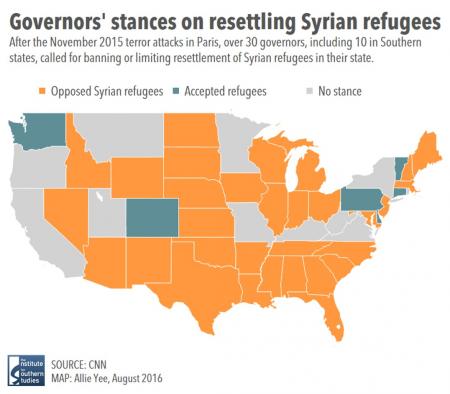 “[Anti-refugee sentiment] was really fueled by the election rhetoric at the federal level,” said Stephanie Teatro, co-executive director of the Tennessee Immigrants and Refugee Rights Coalition (TIRRC). “And we absolutely saw the trickle-down.”

Some critics charged that these statements against refugees, particularly those from Syria, were an attempt to play on people's fears in order to score points in an election year. For example, when North Carolina Gov. Pat McCrory (R) called for a stop to resettling Syrian refugees in his state, a representative of a refugee assistance agency noted the political nature of the governor's move.

"[Anti-refugee sentiment] was really fueled by the election rhetoric at the federal level," said Stephanie Teatro, co-executive director of the Tennessee Immigrants and Refugee Rights Coalition (TIRRC). "And we absolutely saw the trickle-down."

"What we're fighting is an election cycle," Andrew Timbie, then with World Relief's High Point, North Carolina, office, said at the time. He noted that raising concerns about refugees and resisting President Obama's refugee resettlement efforts would resonate with certain voters in the state.

This fall McCrory is facing off against state Attorney General Roy Cooper (D) in one of the nation's tightest gubernatorial races. Back in November, the McCrory campaign used his statement about banning Syrian refugees as a fundraising hook on Facebook, with a post that read “NO SYRIAN REFUGEES” and linked to his campaign's contribution page. Cooper also put out a statement asking to "pause" Syrian refugee resettlement.

It's not just governors and would-be governors who are using the refugee crisis for political advantage. State legislators in Florida, North Carolina, South Carolina and elsewhere have introduced legislation to ban new refugee arrivals to their states or to make resettlement more difficult. Texas and Alabama went so far as to sue the federal government to block refugees, although both of those lawsuits have been dismissed.

And Tennessee lawmakers passed a resolution earlier this year directing the state to sue the federal government over refugee resettlement under the 10th Amendment, which limits federal powers. The resolution passed despite reservations from Gov. Bill Haslam (R), who did not sign it, and the refusal of state Attorney General Herbert Slatery (R) to represent the state in any such lawsuit.

"There were a handful of legislators who saw this as a winning political issue," Teatro from TIRRC said. "[They thought] that they could really run on and build a reputation on being tough on refugees."

No lawsuit has been filed yet. Tennessee legislators are considering hiring an outside law firm to represent the state.

The political backlash against refugees comes at a time when the South — a region with historically low rates of immigration — has been experiencing dramatic growth in foreign-born newcomers, including refugees. 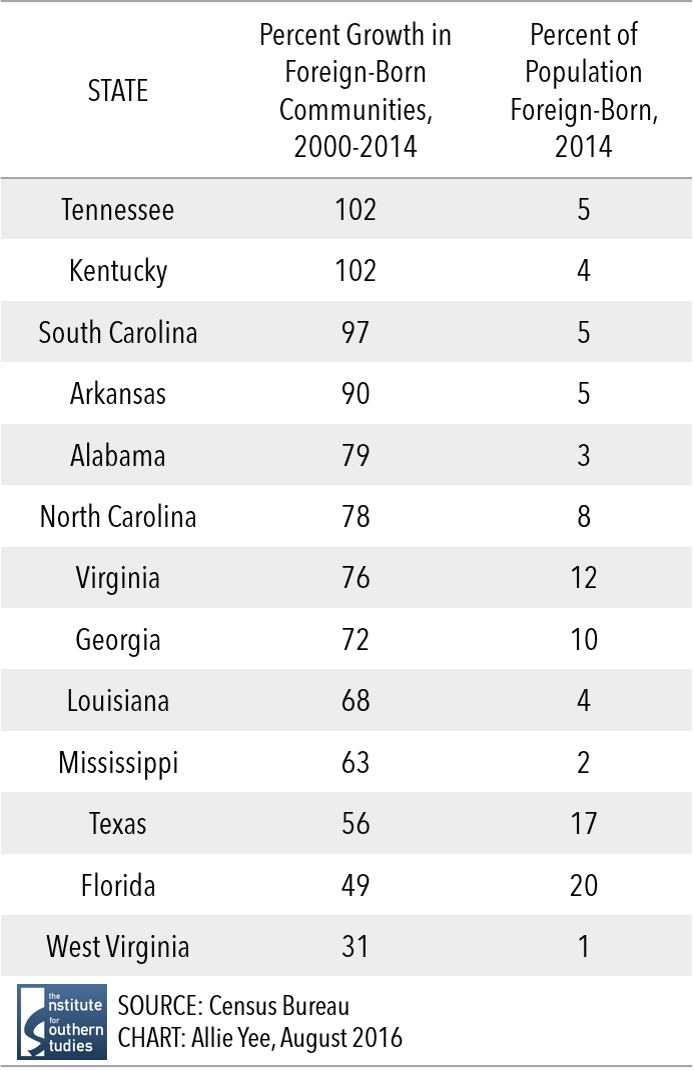 Southern states like Tennessee, South Carolina and Alabama have had some of the fastest rates of growth nationally among their foreign-born populations. And while immigrants make up only a small share of most Southern states' population — and refugees an even smaller share —  the arrival of new languages, complexions, cultures and religions has elicited reactions from local communities ranging from wariness to outright hostility and even violence.

The anti-refugee reaction is intertwined with the rise of anti-Islamic sentiment in the region. A report published last year by TIRRC addressed this in Tennessee:

In this context of generalized anxiety and backlash against newcomers, Islamophobia was never far from the surface. An estimated 48% of refugees resettled in Tennessee in 2013 were from majority Muslim countries, while only 1% of US-born Tennesseans identify as Muslim.

Syrian refugees, who have been the focal point of the anti-refugee backlash in the past year, have been increasing in numbers in Southern states recently. But even so, they make up only a small share of all the refugees coming to the region, many of whom are coming from other conflict-torn countries like the Democratic Republic of Congo, Somalia and Bhutan.

A debate over refugees is also taking place on the local level across the South, with responses ranging widely from place to place.

Some local communities in the region have been extremely hostile to refugees. The TIRRC report chronicles how backlash in Tennessee cities including Nashville, Columbia, Shelbyville and Murfreesboro stoked anti-immigrant and anti-refugee sentiment across the state. Incidents like the 2010 arson at a mosque in Murfreesboro garnered widespread media attention and established the state's reputation as unwelcoming of newcomers.

Many of the Southern communities most hostile to refugees have had few resettled there. But in communities that have become resettlement hubs, the sentiment is often very different.

“Some of the anti-refugee voices are coming from places with few refugees,” Teatro noted. “In cities and communities where refugees are actually resettled, they are welcomed and the program is defended.”

"Some of the anti-refugee voices are coming from places with few refugees," Teatro noted. "In cities and communities where refugees are actually resettled, they are welcomed and the program is defended."

Nashville, Tennessee, where TIRRC is based, is home to 75 percent of the refugees who have resettled in the state. The fast-growing city has been proactive in welcoming both immigrants and refugees.

Teatro was encouraged by Nashville voters' rejection just last week of a candidate who sent a campaign mailer that attempted to stoke anti-refugee fears.

In the GOP primary for the state Senate's District 20 seat, challenger Ron McDow attacked incumbent Steve Dickerson for being the only state Senate Republican not to vote for the resolution directing the state to sue over refugee resettlement.

McDow distributed a campaign mailer in July showing an image of an ISIS flag flying in a neighborhood, with the words, "Does Steve Dickerson want ISIS living next door to your family?" On the other side, the mailer said, "Steve Dickerson says come on in — and puts out the welcome mat for potential dangerous Syrian refugees." 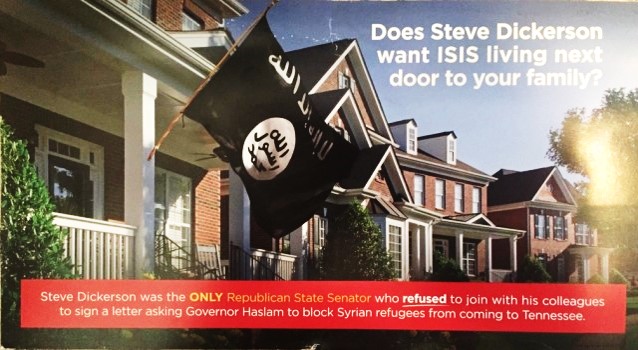 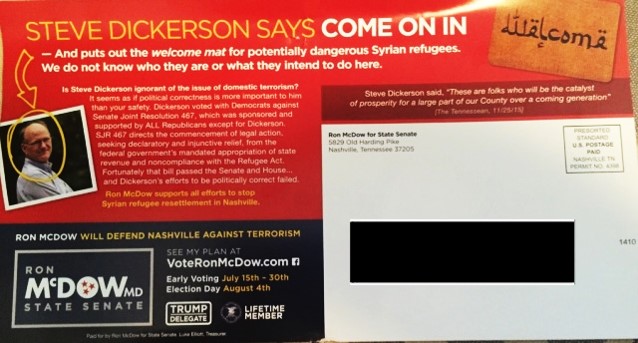 In response to the ads, Dickerson stood by his vote, saying, "The people who we are trying to welcome into the country are people who are literally in fear of their lives … This [ad] also misrepresents the refugee community at-large by painting them with this brush."

In Tennessee's Aug. 4 primary election, Dickerson won handily with 60 percent of the vote in his district. For Teatro, it was a hopeful sign.

"We know legislators will continue to play on the worst sentiments of Tennesseans," Teatro said. "But we're also optimistic that [Tennesseans] voted against that rhetoric."

10 North Carolina races where Asian Americans could sway the outcome