With key races coming down to the wire in North Carolina, an array of groups are working to boost African-American voter turnout, which during the state's early voting has so far lagged behind levels reached in 2012. (Photo by Susan Melkisethian via Flickr.)

North Carolina remains one of the most critical battleground states in the country in 2016. Right now, FiveThirtyEight.com projects the vote margin between Hillary Clinton and Donald Trump is a razor-thin 0.1 percent — about 6,800 voters, or three voters per North Carolina precinct.

Besides the down-to-the-wire presidential contest, North Carolina also has toss-up races for U.S. Senate, governor, N.C. Supreme Court and attorney general that could shape the political direction of the state for years to come.

With margins so close up and down the ballot, black leaders and voting rights advocates have voiced growing alarm over data showing that early voting among African Americans in North Carolina has dropped significantly since the last presidential election in 2012.

The decline was most pronounced last week, when many North Carolina counties had yet to open all of their early voting sites. While black early voting has picked up in recent days, a Facing South/Institute for Southern Studies analysis of early voting data as of Friday, Nov. 4, finds that the share of North Carolina's early voters who are African-American has dropped from 27 percent in 2012 to just under 22 percent of the early voting electorate in 2016.

With two days of early voting remaining, black early voting in North Carolina in 2016 sat at about 75 percent of its 2012 levels. Nearly 190,000 African-American voters would have to cast a ballot before early voting closes on Saturday, Nov. 5, to match black turnout four years ago.

Many of those counties increased their early voting sites and hours this week, but while African-American turnout has increased, it's still short of the 2012 pace. In the 17 counties, the Facing South/Institute analysis finds that black early voting is still 72,000 votes lower than 2012, a gap unlikely to be closed by Saturday.

The following chart shows 13 counties in North Carolina where the gap in African-American early voting turnout stands at 3,000 or more voters with two days of early voting left. Counties in bold are those that had reduced early voting options in 2016 compared to previous years. (Click on the chart for a larger version.) 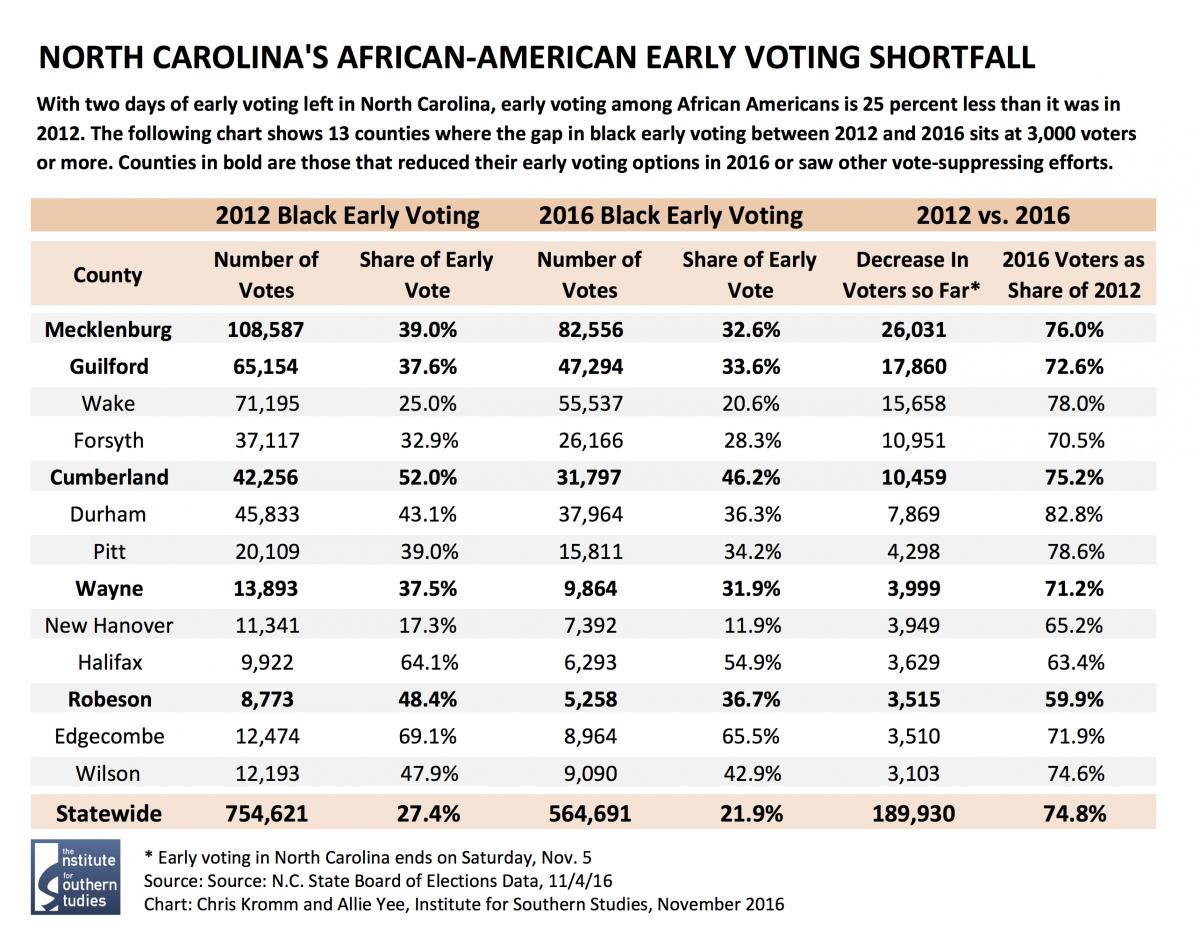 Other factors have likely played a role. Hurricane Matthew, which crashed into the North Carolina coast in late September, displaced thousands in southeastern counties with large African-American communities.

The overall impact these and other factors will have on North Carolina's elections is unclear; it's difficult to project how early voting will impact overall turnout through Election Day. But internally, groups working on get-out-the-vote efforts are estimating a drop-off of up to 90,000 African-American voters in the state in 2016.

A closer look at key North Carolina counties shows the obstacles that have helped dampen black voter turnout so far:

Cumberland County: With a population that is 38 percent African-American, black early voting in Cumberland County in 2016 is more than 10,000 votes short of the total reached in 2012, and the share of the county's early voters who are African-American has declined from 52 percent to 46 percent. The county, which was hit hard by Hurricane Matthew, is a key target in the N.C. NAACP's lawsuit, which alleges that up to 3,900 voters there were improperly purged from the voting rolls.

Guilford County: Home of Greensboro, where 40 percent of residents are black, advocates were able to push back original plans to slash early voting, ultimately securing 25 early voting sites and one day of Sunday voting. But the number of county voting sites open during the first week of early voting fell from 16 in 2012 to just one this year.  Currently, black early voting is 28 percent below 2012, a deficit of more than 17,000 voters.

Mecklenburg County: By far the largest county affected, Mecklenburg opted to start early voting with only 10 sites, which increased to 22 on Oct. 28. African Americans have gone from 39 percent of early voters in 2012 to 33 percent this year. The black early voting deficit between 2012 and 2016 stands at more than 26,000 voters.

Robeson County: In September, the Republican state election board approved a plan to cut voting hours in this racially diverse county from 348 in 2012 to 323 this year. Robeson has also been devastated by Hurricane Matthew. So far in 2016, black voters have declined from 48 percent of the early vote in 2012 to 37 percent this year. The total number of African Americans voting early there in 2016 stands about 40 percent under 2012 totals, leaving a deficit of more than 3,500 voters that will be difficult to close by Saturday.

As noted by Jason Johnson, political editor at The Root, it was likely never realistic to expect 2016 African-American turnout to match the numbers in President Obama's historic runs. And he points out the danger of Democrats in particular blaming election outcomes on black voters, who have consistently been progressives' most reliable voting base and have historically voted at higher levels than other groups.

An array of groups and politicians are mobilizing African-American voters in North Carolina and aim to close the gap. This week, the state NAACP kicked off a "Moral March Tour" in six areas, ending in two cities based in counties where early voting turnout has lagged: Fayetteville in Cumberland County and Winston-Salem in Forsyth County. National campaigns are also underway to engage young black voters, who have been especially under-represented in North Carolina early voting. Labor, nonprofits and political groups have all ramped-up turnout in counties with large African-American communities.

In addition, Democrats, led by President Obama, have made boosting the African-American vote a central theme in a series of campaign stops in North Carolina. In a speech this week in Chapel Hill, Obama said that the black vote in 2016 "is not as solid as it needs to be" and used the barriers being put before African-American voters as a rallying cry.

"They're just out in public saying we're going to try and suppress the African-American vote on Election Day, or the youth vote on election day," Obama told the crowd. "How are we going to betray folks that have worked so hard so that we can pull the lever and we're not going to vote? What's our excuse?"