The West Virginia teachers' strike that began in February 2018 inspired labor activism in other states, as shown by this sign carried by a participant in a May 2018 teachers' protest in North Carolina. (Photo by Chris Kromm.)

In 2018, which was marked by high-profile teacher protests and an ominous U.S. Supreme Court ruling that targeted public-sector unions, union membership held steady in the South for a second straight year.

Data released by the U.S. Bureau of Labor Statistics shows that the share of Southern workers belonging to unions barely declined between 2017 and 2018, from 5 percent to 4.9 percent, while the number of employees in the South represented by a union was unchanged, at 6.1 percent.

At the national level, union membership dropped from 10.7 percent to 10.5 percent during the same time period, and the share of workers represented by unions also fell by .2 points, to 11.7 percent. (Click on chart for a larger version.) 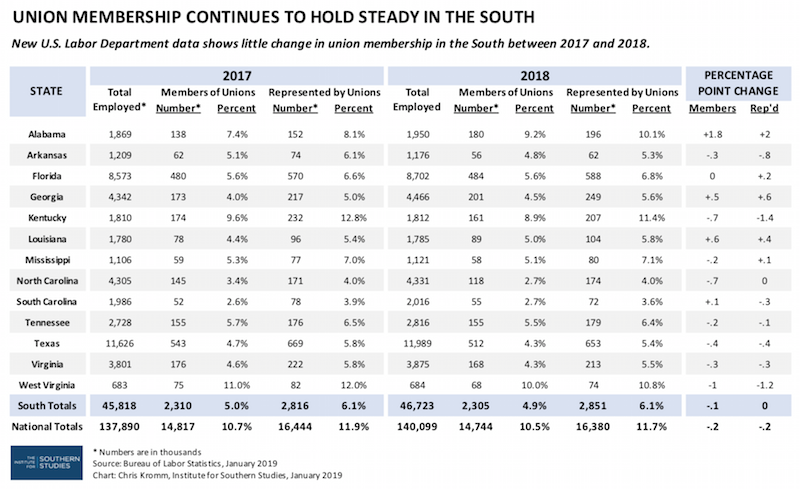 That gap is expected to grow as a result of the Supreme Court's Janus decision issued last summer, which held that public-sector employees don't have to pay union dues to be part of collective bargaining agreements.

While Janus filled union leaders with dread about the future of the labor movement, a wave of teacher protests that began in the South were a reminder of the persistent power of worker organizing. In late February 2018, some 20,000 teachers in West Virginia and thousands of additional employees shut down schools in all 55 of the state's counties.

The two-week strike in West Virginia, which drew on the state's militant labor history, won a 5 percent pay raise for public school employees — five times what was originally proposed by state lawmakers — and inspired large-scale protests in seven more states including Kentucky, North Carolina, and Virginia. As a middle school teacher in Arizona, which also saw a statewide teacher strike, wrote:

The West Virginia teachers' strike opened our eyes to an empowering alternative reality of what is possible if we collectively organize and come together in solidarity.

Other labor campaigns waged in the South last year, while lower profile than the education insurrection, also netted significant gains for unions. More than 12,000 AT&T Wireless employees from nine Southern states and the Virgin Islands won increased job security and rolled back the telecom giant's offshoring plans in a contract negotiated by the Communications Workers of America.

In Georgia, 700 workers at Atlanta Gas Light joined the International Brotherhood of Electrical Workers, and in South Carolina, 176 flight-readiness technicians at Boeing — which rebuffed a major union drive in 2017 — elected to join the Machinists Union.

Polls show support for labor in general is at a 15-year high. In a recent Gallup survey, 62 percent of U.S. respondents voiced support for unions, including 60 percent in Southern states, and 65 percent of those aged 18 to 35.

A silver lining in the Supreme Court's expected anti-union ruling