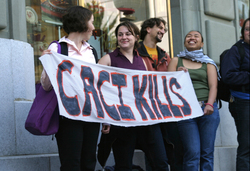 The human rights atrocities committed by U.S. soldiers and private contractors at prisons in Iraq landed in the spotlight again this week when a British newspaper disclosed details of the photographs that President Obama does not want made public.

Meanwhile, CACI International -- a Virginia company implicated in the abuse of Iraqi prisoners -- is facing troubles with its insurance company, which is refusing to defend it in lawsuits over the alleged torture.


At least one picture shows an American soldier apparently raping a female prisoner while another is said to show a male translator raping a male detainee.

Further photographs are said to depict sexual assaults on prisoners with objects including a truncheon, wire and a phosphorescent tube.

Another apparently shows a female prisoner having her clothing forcibly removed to expose her breasts.

The Obama administration has denied the newspaper's account, with White House Press Secretary Robert Gibbs and a Pentagon spokesperson saying the story is not true and that the paper mischaracterized the images.

Taguba made his remarks in an effort to defend the President's decision not to release the photos, according to the Daily Telegraph:

"I am not sure what purpose their release would serve other than a legal one and the consequence would be to imperil our troops, the only protectors of our foreign policy, when we most need them, and British troops who are trying to build security in Afghanistan.

"The mere description of these pictures is horrendous enough, take my word for it."

Last month the Obama administration said it would release the photographs following a court ruling in a case brought by the American Civil Liberties Union, which wants the documents released. But the president later changed his mind after hearing from military officials fearful over the impact that releasing them could have on the troops' safety.

ACLU Executive Director Anthony Romero said Obama's reversal betrays commitment to transparency and the rule of law, and warned that once the photos are released "the outrage will focus not only on the commission of torture by the Bush administration but on the Obama administration's complicity in covering them up."

There have long been questions about the extent of military contractors' involvement in the Iraqi prison abuse, including employees of CACI International of Arlington, Va., a publicly-held company that provided intelligence and interrogation services to the U.S. military. Taguba's report into the atrocities against detainees cited the involvement of CACI interrogator Steven Stephanowicz, finding that he was among the soldiers and contractors who "were either directly or indirectly responsible for the abuses at Abu Ghraib."

CACI has vigorously defended itself against the charges, pointing out that none of its employees have been indicted for misconduct. It has also said that none of its current or former employees appear in any of the Abu Ghraib photographs that have been released to date. The Daily Telegraph did not mention the company in its report about the undisclosed photos.

The company sued the Air America talk radio program and parent company Piquant for defamation several years ago after host Randi Rhodes accused CACI employees of raping and murdering Iraqi civilians at the prison. A federal appeals court rejected that suit last year, holding that Rhodes' speech was protected by the First Amendment because military contractors are public figures.

CACI is facing legal troubles of its own after a federal court in Virginia ruled in March that four former Abu Ghraib detainees who were tortured and later released without charge can sue it. The lawsuit was brought by a legal team including attorneys with the Center for Constitutional Rights, which also sued Blackwater -- the North Carolina military contractor that has since changed its name to Xe -- over the mass shooting of Iraqi civilians in a Baghdad square.

CACI is also facing troubles with its insurer. Earlier this month, the 4th U.S. Circuit Court of Appeals ruled in a split decision that the company's carrier, St. Paul Fire and Marine Insurance Co., is not obligated to defend it in the torture lawsuit because the allegations happened in Iraq, which is outside the coverage area. The ruling upheld the opinion of a district court judge handed down last summer.

However, CACI's legal problems have not hindered its ability to land lucrative government contracts. This year alone, it has won deals with various divisions of the U.S. government and military worth as much as $1.8 billion, according to the company's news releases. They include a $114 million contract to support national security and intelligence.

A nonprofit investigative news organization recently listed CACI among the contractors with checkered pasts that have landed millions of dollars in contracts under the federal economic stimulus plan. As ProPublica reports:

One company receiving stimulus money, CACI International, has won three contracts worth $1.5 million to provide contracting specialists to the Forest Service. The consultants will help the agency evaluate projects so that it can spend stimulus money quickly.

CACI came under fire in a 2004 Army investigation, which found that interrogators it provided for the Abu Ghraib prison in Iraq had dragged a handcuffed prisoner along the ground, placed a prisoner in an "unauthorized stress position" and violated the ban on drinking alcohol.

The investigation found that the company had an insufficient screening process and hired employees who "lacked sufficient background and training." One CACI employee, who bragged about dressing a prisoner in women's underwear and lied to investigators about using dogs in interrogations, had "little or no interrogator experience" before Abu Ghraib, the report said.

Despite the serious charges CACI faces, it placed third in a 2008 ethics survey of the 100 largest government contractors, and Fortune magazine recently named it one of the world's most admired companies.