Skip to main content
Defend democracy in the South.
Donate Today
By Desiree EvansJune 30, 2009
In September 2007 more than 40,000 demonstrators descended on the small town of Jena, La. to protest unequal justice for the Jena Six, a case in which charges were brought against six black teens following a series of racially charged incidents sparked by the hanging of nooses in a public schoolyard. Facing South followed the case closely as it thrust a small central Louisiana town into the national spotlight and drew the eyes of the country to the lines of racial inequality still present in the modern-day South.The nooses were hung by white students after black students sat under a tree the white students apparently considered their own. The students who hung the nooses faced only a brief suspension from school and no criminal charges for their actions, sparking anger among the town's black residents. The racial tension led to a number of confrontations and fights between whites and blacks, with blacks consistently facing harsher punishment for their actions. In the case of the Jena Six, six black youths, at the time all students at Jena High school, were charged in December 2006 with beating a white schoolmate, Justin Barker. The black youths initially faced felony charges of attempted murder with potential fines of more than $90,000 and potential sentences as high as 20 years. 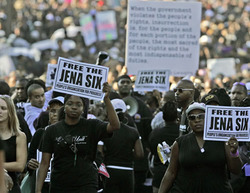 The severity of the charges drew widespread international criticism and protest. A judge went on to reduce the charges against Carwin Jones, Jesse Ray Beard, Robert Bailey Jr., Bryant Purvis and Theo Shaw to aggravated second-degree battery. Mychal Bell, the only one of the Jena Six to go to trial, pleaded guilty to second-degree battery as a juvenile in December 2007 and has since completed his period of 18-months in jail.
Last Friday the case -- which captured the imagination of a whole generation of black youth -- came to a final resolution. The five remaining Jena Six defendants -- Carwin Jones, Jesse Ray Beard, Robert Bailey Jr., Bryant Purvis and Theodore Shaw -- pleaded no contest to simple battery and agreed to fines and seven days of probation.
Civil rights activists have pointed out that the case of the Jena Six shone a light on the miscarriages of justice that happen to black male youth across the country. As David Utter of the Southern Poverty Law Center said last Friday: "These things don't just happen in Louisiana."
ColorOfChange.org, the online civil rights group that raised more than $275,000 for legal defense for the Jena Six, applauded the plea bargain. In a press statement on Friday the group said:

[T]he plea deal marked an acknowledgement by officials that the Louisiana justice system initially treated the then-teenage boys too harshly, privileging white students' accounts of a schoolyard fight over those of black students in the largely segregated town of Jena.

"Today's plea deal shows that the original charges in the case were unfair and vastly overblown," said James Rucker, ColorOfChange.org's executive director. "The story of the Jena 6 was an extreme example of what can happen when a justice system biased against black boys operates unchecked. But it's also an example of what can happen when hundreds of thousands of people across the country stand up to challenge unequal justice."

All in all, most observers agree it was a quiet end for the young men who, in 2007, were at the center of one of the largest civil rights demonstrations in a generation and the subject of rallying cries such as "Free the Jena Six." All the young men are now moving on with their lives, their attorneys say. Purvis is attending Ranger Junior College in Ranger, Texas; Bailey plans to enroll in Grambling State University in the fall; Shaw is attending Delta State Community College in Monroe; Jones is attending Tyler Junior College in Texas; Beard is enrolled in Canterbury, a private prep school in Connecticut; and Bell is enrolled in a historically black college in Louisiana.

New developments in possible lynching case out of North Carolina

Lessons From the Jena Six

Update on the Jena 6 case