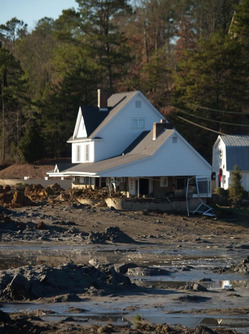 The state of Tennessee has assessed an $11.5 million penalty against the Tennessee Valley Authority for the December 2008 coal ash spill from a holding pond at its Kingston power plant in Roane County. The fine is the largest ever imposed by the state's environmental regulators -- but some affected residents say it's not enough.

While Tennessee Department of Environment and Conservation Commissioner Jim Fyke called the penalty "appropriate," local resident Randy Ellis -- a member of committees involved in the cleanup effort -- said the assessment was a "slap on the wrist" given the scope of the disaster.

"But I am glad TVA was treated the same as any private company would have been treated in a situation like this," Ellis told the Chattanooga Times Free Press.

TVA is a federally owned but independently financed corporation created by congressional charter in 1933. The company's net income in fiscal year 2009 was $726 million; it does not make a profit, instead reinvesting income in projects to improve and expand its infrastructure.

On Dec. 22, 2008, an earthen dam holding back 50 years' worth of wet coal ash -- the toxic waste left over after burning coal for electricity -- collapsed, releasing more than a billion gallons of coal ash onto a residential community and into the nearby Emory River. As Facing South's recent investigative series on coal ash reported, TVA had known for years that there were structural problems with the dam but failed to make the necessary fixes.

According to a state order issued this week, the penalty is to be paid in stages, with $2.5 million due to TDEC by July 15. By year's end TVA must propose at least $2 million in projects to benefit the environment, subject to TDEC's approval; if it fails to do so, TVA must pay any remaining balance.

The company must then pay $2 million to TDEC by July 15, 2011, and another $2 million a year after that. TVA has already forked over $3 million to reimburse the department for its oversight costs, and it must continue to pay those costs over and above the total $11.5 million assessment. Federal fines are also a possibility.

"Significant progress has been made, as signified by the completion of time critical activities, and there is much left to do," said TDEC Deputy Commissioner Paul Sloan. "We are committed to seeing this cleanup through to completion."

About three-fifths of the spilled ash has been recovered so far, with much of that having been shipped to a problem-plagued landfill in Perry County, Ala. This fall TVA will begin storing the recovered coal ash in an unlined dump near the Tennessee disaster site -- a cheaper option than sending it out of state.

The total cost of the cleanup has been estimated at over $1 billion, with the expense to be borne by TVA's ratepayers. But the company still estimates that about 500,000 cubic yards of spilled ash -- laden with heavy metals including arsenic and lead as well as radioactive elements -- will remain in the Emory because workers are simply unable to scrape it all up.

The nation's second-largest industrial waste stream, coal ash is currently unregulated by the federal government and subject to an uneven patchwork of state rules. The U.S. Environmental Protection Agency recently released two proposals for bringing the waste under federal oversight and is seeking public comment on them.

OMB Watch, a nonprofit organization that monitors secrecy at the White House Office of Management and Budget, recently uncovered an internal administration document indicating the Obama administration may have watered down the proposal for regulating coal ash at the behest of TVA, which was given a chance to comment on the rules before they were released to the public.

(Photo of the TVA ash spill by United Mountain Defense.)