Skip to main content
Join the voice for a changing South.
Donate Today
By Sue SturgisJune 20, 2014

Members of the United Radio, Electrical and Machine Workers union at a 2013 march in Raleigh, North Carolina. (Photo by Sue Sturgis.)

Average CEO compensation in 2013, according to a study released this month: $15.2 million

Percent by which CEO compensation, inflation-adjusted, increased from 1978 to 2013: 937

Percent by which the typical worker's compensation grew over the same period: 10.2

Rank of the South among U.S. regions with the greatest inequality within its communities: 1 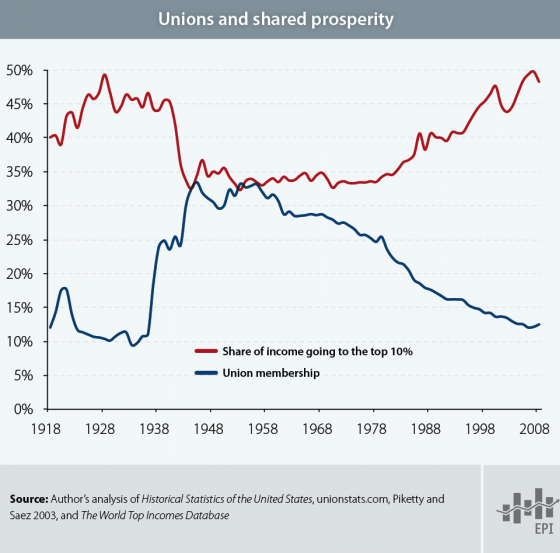 Of the 100 U.S. counties with the greatest income inequality, number in the South: 77

Rank of the South among the nation's least-unionized regions: 1

Percent of the increase in inequality over the past 30 years estimated to be attributable to the decline in unionization: 10 to 20

Number of states in the old Confederacy with unionization rates above the national average: 0

Year in which the AFL-CIO approved a resolution to develop a Southern organizing strategy: 2013

Of the five states where union membership is growing the fastest, percent in the South: 100

Percent by which union membership grew last year in Tennessee: 25

Rank of North Carolina among the states with the lowest unionization rates: 1

Percent of North Carolinians who belong to unions: 3