North Carolina's 12th Congressional District is the nation's most gerrymandered.

A new study by researchers at Duke University shows the extent to which Republican legislators drew North Carolina's U.S. congressional districts in their party's favor in 2011.

Duke mathematics professor Jonathan Mattingly and undergraduate student Christy Vaughn recently published a preliminary version of "Redistricting and the Will of the People," in which they used math to demonstrate how drastically the state's current congressional districts differ from hypothetical nonpartisan districts.

In 2012, 51 percent of North Carolina voters cast their ballots for a Democratic U.S. House candidate, yet only four out of 13 seats, or 31 percent, went to Democrats. Mattingly and Vaughn used randomized probability distributions to simulate the redistricting process 100 times, adhering to three federal requirements: that the districts be connected, compact, and come as close as possible to containing the same number of residents. Then they ran simulations, using the exact votes from the 2012 elections.

Their results? An average of 7.6 winning Democrats -- almost double the actual number.

The findings led them to conclude that the 2011 redistricting is arguably "at odds with the will of the people" and that the system needs "checks and balances to ensure that democracy is served."

In this year's elections, Republicans extended their domination of North Carolina's congressional delegation, unseating one Democrat to control 10 of the 13 seats, or 77 percent of the representatives, while winning only 55 percent of the vote. The discrepancy between Democratic vote percentage (44) and the party's slice of North Carolina's U.S. representatives (23) is 21 percent, slightly higher than in 2012.

And this is no isolated phenomenon: As Republicans have taken over state legislatures across the South, their party is overrepresented in Congress due to gerrymandered voting districts state lawmakers created in 2011.

The Duke study has come under some criticism for not taking race into account in how it configured its hypothetical districts.

Section 2 of the Voting Rights Act requires states to give minority voters an equal opportunity "to participate in the political process and to elect representatives of their choice." Republicans have taken this directive as a cue to create "majority-minority" districts that purportedly give people of color a better shot at sending non-white representatives to Washington. Sometimes this has resulted in bizarrely shaped districts packed with minorities, weakening their political power elsewhere.

@imillhiser @rickhasen Math team drew pretty districts, w/o real-world law. As math test, no problem. But pretty does not = fair or just.

Mattingly and Vaughn have said they did not intend for their simulations to be viable voting districts. Rather, they sought to provide a test of fairness -- a way to compare current and proposed redistricting proposals with random, nonpartisan versions. However, they have said it would be possible to change their model to account for race.

The most gerrymandered state in the U.S.

Two of the three are majority African-American districts, which will send black lawmakers G.K. Butterfield (District 1) and Alma Adams (District 12) to Congress in 2015. The third is District 4, which includes much of the liberal-leaning Triangle region and which David Price, who is white, has represented since 1997.

District 12 (in photo above) is the nation's most gerrymandered district, stretching from north of Greensboro and Winston-Salem all the way to Charlotte, near the state's southern border. It is 52 percent African American. District 1 in the northeastern part of the state is 54 percent black; it is the country’s fifth most gerrymandered district, crossing 24 different counties: 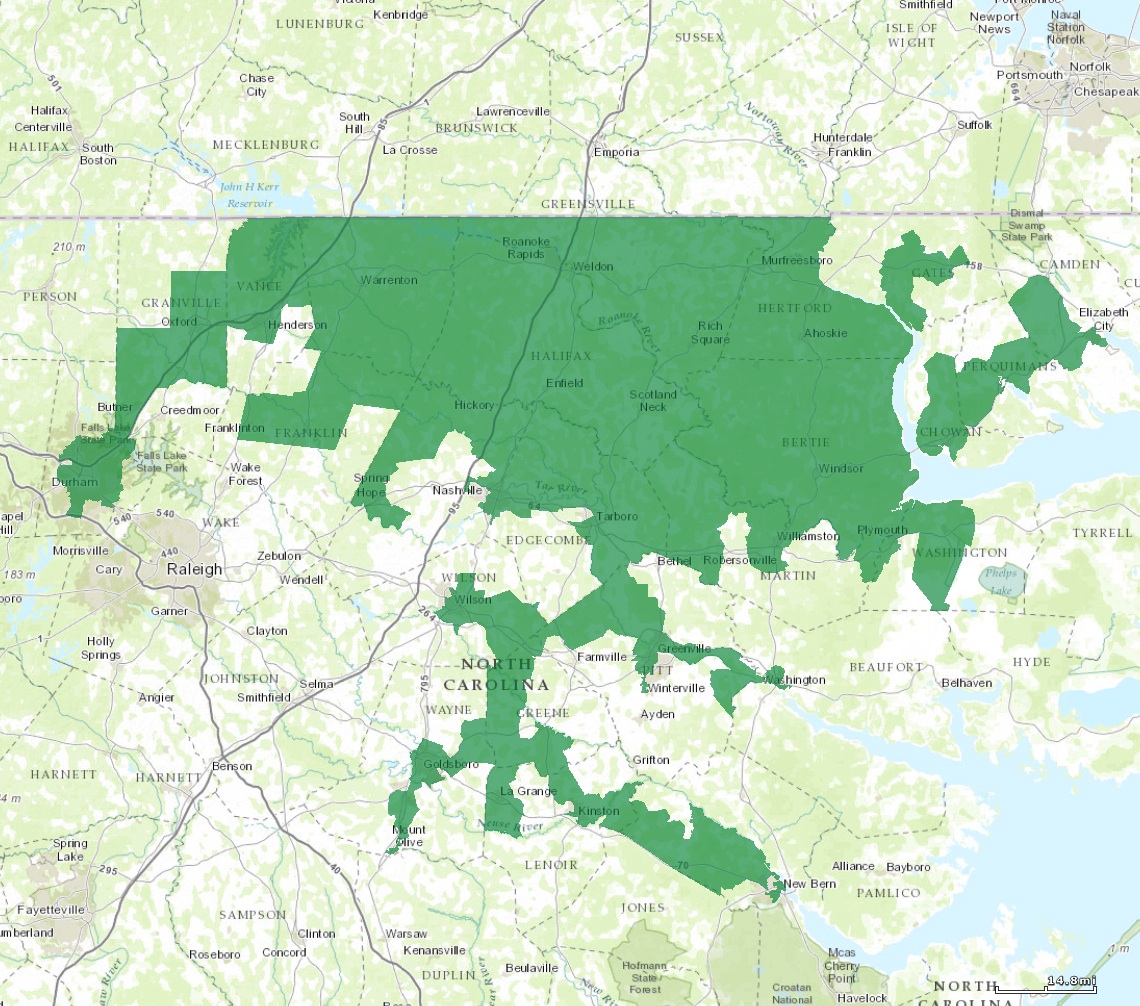 There have been numerous lawsuits over North Carolina’s gerrymandered voting districts. A three-judge panel ruled in favor of the Republican-drawn districts last year, but the state NAACP has appealed to the N.C. Supreme Court, arguing that Republicans packed too many African Americans into a small number of districts, reducing the impact of their votes.

There is support across the political spectrum for reforming the state's redistricting process. For example, both John Hood, president of the conservative John Locke Foundation, and Chris Fitzsimon, director of the liberal NC Policy Watch, support drawing North Carolina's districts in an impartial, nonpartisan way.

There is even support for revamping the redistricting process among GOP state lawmakers. In 2011, the first year of Republicans’ newfound power in the N.C. legislature, the House voted overwhelmingly in favor of House Bill 824, which would have left redistricting to the nonpartisan Legislative Services Office. However, the measure died in the Senate Rules Committee.

In 2013, another attempt at an independent redistricting bill emerged in the House with much fanfare, but it never made it to the Senate.

Meanwhile, state Attorney General Roy Cooper, a Democrat expected to challenge Republican Gov. Pat McCrory in 2016, is also promoting nonpartisan redistricting reform. McCrory has also raised concerns about the effects of gerrymandered districts. However, he said he does not support a neutral redistricting commission since it would still be appointed by politicians.