When Hurricane Katrina hit the U.S. Gulf Coast 10 years ago, it set off a disaster of many parts — and one of those parts was an oil spill catastrophe.

In fact, Katrina turned out to be the worst U.S. oil spill disaster since the 1989 Exxon Valdez tanker spill in Alaska. The storm resulted in an estimated 8 million gallons of oil spilled onto the ground and into waterways from Louisiana to Alabama. Both of those incidents have since been surpassed by the 2010 BP spill in the Gulf, which affected some of the same areas as the Katrina spill.

The Katrina oil disaster offers important lessons for residents of the Atlantic Coast — another hurricane-vulnerable region that may soon be opened to offshore drilling. Federal regulators are now considering whether to include an area 50 miles off the coast from Virginia to Georgia in the 2017-2022 Outer Continental Shelf drilling lease plan.

Katrina made its initial landfall in southeastern Louisiana in Plaquemines Parish, a center of the oil industry, as a Category 3 storm with sustained winds of 125 miles per hour. The two single largest spills resulting from the storm occurred in Plaquemines: one involving storage tanks at the Bass Enterprises site in Cox Bay that dumped 3.78 million gallons of oil into the environment, and another from Chevron's Empire terminal in Buras that released 1.4 million gallons.

There were also spills in more populous parts of the state, including an incident involving a ruptured storage tank at the Murphy Oil refinery in St. Bernard Parish just east of New Orleans that spilled about 1 million gallons of oil, affecting as many as 10,000 homes in the surrounding neighborhoods.

In 2006, the U.S. Minerals Management Service (MMS), since reorganized into the Bureau of Ocean Energy Management, issued a report on damage to oil and gas infrastructure resulting from Katrina as well as Hurricane Rita, which made landfall on Sept. 24, 2005 as a Category 3 storm along the Texas-Louisiana border. MMS found that together the two storms damaged a total of 457 pipelines, 101 of those major lines of 10 inches or more in diameter, and destroyed 113 offshore drilling platforms. A 2007 study for MMS reported that the storms also resulted in about 750,000 gallons of petroleum products spilling from offshore platforms, rigs and pipelines.

President George W. Bush's White House acknowledged the enormity of the Katrina oil disaster in the official administration report on the storm, "The Federal Response to Hurricane Katrina: Lessons Learned":

Much more than any other hurricane, Katrina's wrath went far beyond wind and water damage. In fact, Hurricane Katrina caused at least ten oil spills, releasing the same quantity of oil as some of the worst oil spills in U.S. history.

In the years since Katrina, however, politicians friendly with the oil and gas industry have tried to erase the reality of the storm's impact on the Gulf's energy infrastructure and the resulting pollution. That effort to rewrite history intensified in 2008 after President Bush, a former Texas oilman, reversed decades of presidential policy by proposing to expand offshore drilling to new areas, including the Atlantic Coast.

Louisiana Gov. Bobby Jindal, now running for the Republican nomination for president, told Fox News in the wake of Bush's drilling announcement, "That's one of the great unwritten success stories, after Katrina and Rita, these awful storms, no major spills." Around the same time, former Arkansas Gov. Mike Huckabee, also currently running for the GOP presidential nomination, said that "not one drop of oil was spilled off of those rigs out in the Gulf of Mexico" when Katrina hit.

North Carolina Gov. Pat McCrory — who's now leading the charge for Atlantic oil and gas drilling as chair of the industry-managed Outer Continental Shelf Governors Coalition, despite strong opposition in coastal communities — also weighed in during his unsuccessful 2008 gubernatorial run, claiming that "we didn't have one oil spill due to Katrina."

The claims of politicians aside, Hurricane Katrina showed that when major hurricanes hit oil-producing regions they can cause major oil spills. But another lesson storm-prone Gulf Coast communities have learned over the years is that even minor hurricanes can lead to significant spills and pollution.

Consider Hurricane Isaac. On Aug. 28, 2012, the relatively mild Category 1 storm made landfall in southeastern Louisiana at the mouth of the Mississippi River. A year later, the Gulf Monitoring Consortium (GMC) — an alliance of environmental advocacy groups launched to collect, share and publish data on pollution in the region — released a report examining Isaac's impacts.

"Despite the relatively unremarkable nature of the storm, GMC documented numerous examples of pollution from infrastructure failures at fossil fuel transport, storage, and refining facilities during and after the storm," the report stated. "These failures included inadequate levees which allowed contaminated water to spill into surrounding wetlands, waterways, and communities;  insufficient storage capacity to handle stormwater and/or wastewater during predictable high-rain events; tanks and railroad tanker cars shifted or upset by the storm and floodwaters, and other weaknesses."

Among the spills related to Isaac that GMC documented:

* The Marathon refinery in Garyville, Louisiana dumped 12.6 million gallons of untreated stormwater runoff from its process areas into Lake Maurepas.

* Oil wastewater overflowed the collection system at the Phillips 66 refinery in Belle Chasse, Louisiana, which is located on the Mississippi River.

* Though the Valero refinery in St. Charles Parish shut down before the storm, it still experienced a spill of 47 gallons of slop oil, including 7.8 pounds of cancer-causing benzene.

* Satellite images and flyovers taken after the storm documented an oil slick from a closed Chevron offshore well as well as oil leaks at other offshore sites and from oil production and storage facilities.

"In the immediate aftermath of Hurricane Isaac, it became crystal clear that companies are not taking the action necessary to safeguard their facilities," Jonathan Henderson of the Gulf Restoration Network, a GMC member, said at the time.

Besides causing acute oil-spill crises, hurricanes can also lead to chronic leaks — a lesson learned from the ongoing Taylor Energy oil leak a few miles off the Louisiana coast.

When Hurricane Ivan moved through the Gulf of Mexico as a Category 3 storm in September 2004, it triggered an undersea landslide that toppled an oil platform formerly operated by Taylor Energy. The New Orleans-based company has attempted to halt the leak, but it continues 11 years later. 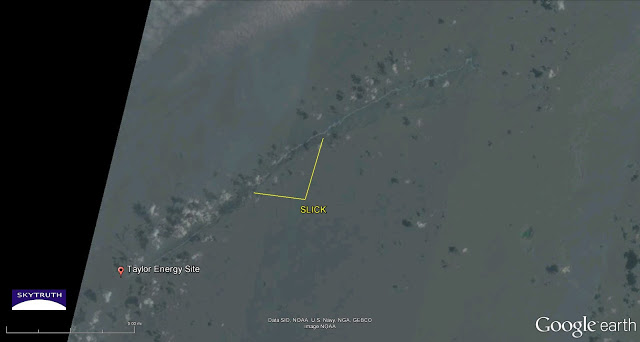 (Detail from a July 3, 2015 satellite image of the Taylor Energy site off the Louisiana coast showing a 21-mile-long slick trailing off to the northeast. Image via SkyTruth.)

SkyTruth, an environmental watchdog group based in West Virginia, has used satellite images and pollution reports to estimate that between 300,000 and 1.4 million gallons of oil have spilled into the Gulf from the Taylor Energy site, and the leak shows no signs of tapering off. Federal officials have said they think it will continue for another century until the reservoir is empty.

Polluting spills are not the only hazards created when the oil industry and hurricanes mix: The combination also drives coastal land loss, making inland communities more vulnerable to storm damage.

One of the reasons Hurricane Katrina was so destructive, causing damages estimated at $108 billion, was that the flooding and storm surges it brought were made worse by the loss of protective coastal wetlands to open waters. Since the 1930s, Louisiana has lost nearly 1,900 square miles of coastal lands — an area about the size of Delaware. The state's land continues to disappear into the Gulf of Mexico at a rapid pace, with an area about the size of a football field lost every hour.

Louisiana is losing land so rapidly in large part because of oil and gas industry activity: the tens of thousands of wells drilled and thousands of miles of pipelines laid and canals carved into coastal wetlands (see U.S. Geological Survey photo of the Louisiana coast above). Every cut made in the wetlands allows the Gulf's saltwater to intrude, which in turn kills soil-anchoring plants and trees, allowing more land to slip away.

The oil and gas industry itself has acknowledged causing 36 percent of all wetlands loss in southeastern Louisiana, with other estimates putting that figure as high as 59 percent. However, the industry is fighting local governments' efforts to make it pay for restoration, which could leave taxpayers to foot the bill.

Also contributing to land loss are levees, which starve coastal lands of fresh sediment, and natural land subsidence. In addition, rising seas are becoming an increasingly important factor in coastal land loss — especially under an energy policy that encourages burning oil and gas. At the same time, the global warming exacerbated by burning fossil fuels is contributing to more intense hurricanes.

The area of the Atlantic Coast from Virginia to Georgia where drilling has been proposed is already extremely vulnerable to hurricanes and sea-level rise. North Carolina is among the most hurricane-prone states in the nation, having experienced 46 hurricanes in the period from 1851 to 2004 — the fourth-most after Florida, Texas and Louisiana. In that same period South Carolina was hit by 31 hurricanes, Georgia by 20 and Virginia by 12.

Meanwhile, scientists have identified a "hotspot" of accelerated sea-level rise on the Atlantic Coast from North Carolina's Outer Banks to Massachusetts, where seas are rising three to four times as fast as they are globally. Norfolk, Virginia already experiences street flooding during ordinary high tides. Recent studies have found that North Carolina's Outer Banks face a sea-level rise of nearly 5.5 inches over the next 30 years, while an earlier study found the ocean off the state's coast would rise 39 inches in the next century. And in South Carolina's Lowcountry, up to five feet of sea level rise are expected by 2100, while Charleston is already experiencing more frequent flooding.

Atlantic Coast communities face a perilous future from a warming climate, rising seas and more destructive hurricanes. Adding oil to the mix will heighten the dangers they face, as Hurricane Katrina showed.

In oil-producing regions, even minor hurricanes cause major environmental damage