Recent elections in Georgia and Virginia showed that Democrats may be able to make inroads in Southern state legislatures, but gerrymandering still tilts the field in favor of Republicans. (Photo: Democracy North Carolina.)

Republicans came out of the 2016 elections controlling every legislative chamber in the South. But this year, with a handful of off-year elections in play, Southern Democrats rode a progressive wave to come within striking distance of winning a majority in the Virginia House of Delegates and picked up three seats in the Georgia legislature.

Analysts and pundits are still divining the lessons of 2017, including the answer to a key question that will shape Southern politics for more than a decade: Where can Democrats win control of Southern legislatures by 2020, when lawmakers will redraw political maps after the census count?

The successes of 2017 certainly offer Democrats grounds for optimism.

In Virginia, where voters cast ballots for all 100 members of the House of Delegates, Democrats controlled only 34 seats heading into the 2017 elections. After Election Day, they had picked up 15 seats. Republicans currently cling to a 51-49 majority, although three of the races are still too close to call and will be decided by lawsuits and recounts. In Virginia House District 94, which includes Newport News, the GOP candidate is currently ahead by a mere 10 votes.

Gerrymandering and the balance of power

In many other Southern legislatures, Democrats are within the same striking distance — or even closer — to taking power as Virginia Democrats were coming into the 2017 elections.

A Facing South/Institute for Southern Studies analysis of the balance of power in the South's 26 legislative chambers finds that in more than half (14), Democrats currently hold 34 percent or more of the seats, giving them an equal or lesser margin than the party closed in 2017 in the Virginia House. 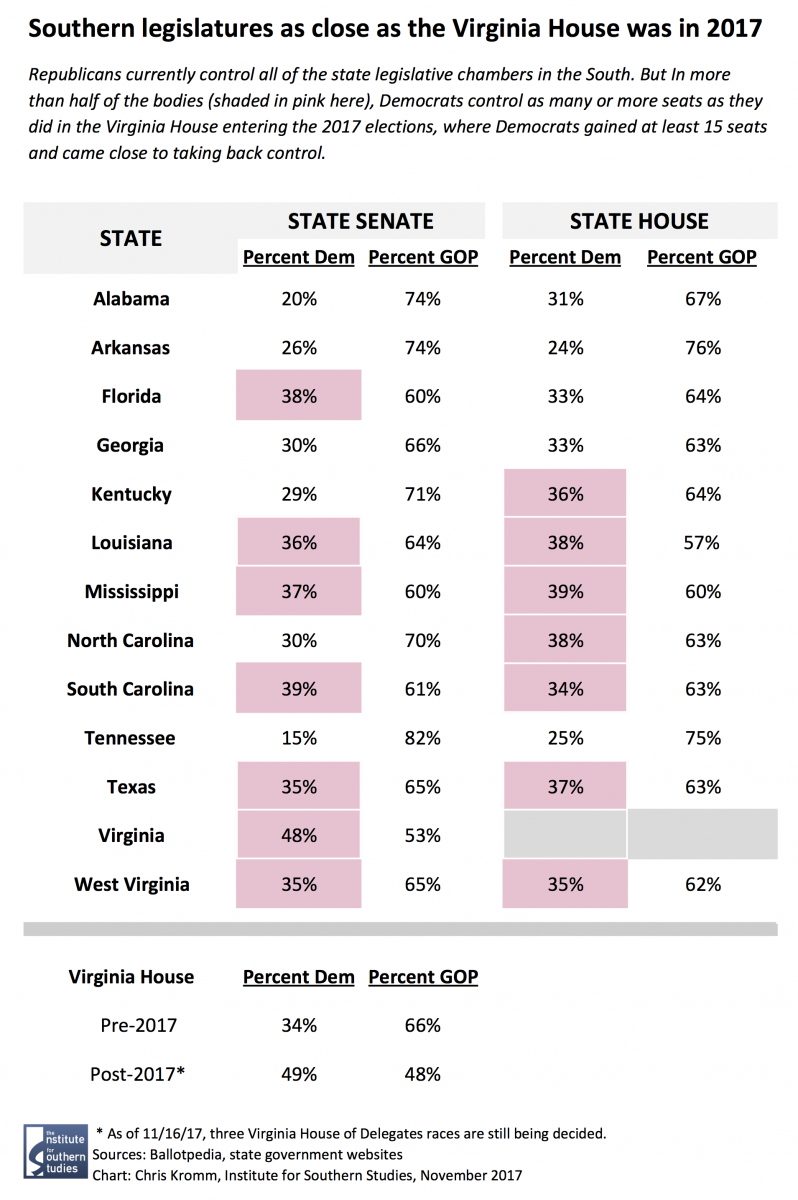 Of course, not every state in the South is like Virginia, a blue-trending state that has voted Democratic for president the last three elections and where seven of the last 10 gubernatorial contests have been won by a Democrat.

Indeed, the ability of Republicans to maintain control of the Virginia legislature this decade was largely due GOP-friendly maps drawn up in 2011, which diluted Democratic voting strength in most districts ("cracking") while giving them hyper-majorities in others ("packing").

Partisan gerrymandering helped Virginia Republicans limit the damage again in 2017. While the House of Delegates is currently almost evenly split between Democrats and Republicans, across the state Democratic candidates received about 220,000 more votes than their Republican counterparts, a 10-point advantage.

If the House election results mirrored the partisan choices of Virginia voters, Democrats would enjoy a 54-44 majority. When Virginia holds its next round of legislative elections in 2019, Democrats may not enjoy the same upswell of Democratic sentiment that brought them to a near-draw in the state's lower chamber. As election law expert Nicholas Stephanopoulos wrote in the Los Angeles Times:

The upshot of these statistics is that gerrymandering works. The Virginia district plan operated exactly as intended in prior elections, returning overwhelming Republican majorities even when voters slightly preferred Democratic statewide candidates. And while a Democratic tsunami hit Virginia on Tuesday, if it recedes even modestly, the map will revert to massively favoring Republicans.

But the 2017 elections also show that, while gerrymandering has tremendous influence on the balance of power in states, it's not the only factor or a fail-safe lock on maintaining political control.

Legislative maps are typically redrawn every 10 years, although litigation has forced several states — including five in the South — to revisit their legislative and congressional districts. Over the course of a decade, demographics and partisan leanings can change, making districts slightly more competitive.

And in some races, it's just a matter of parties putting up a fight. In part due to intense gerrymandering, 45 percent of state legislative seats nationally went uncontested in 2016. Sensing opportunity in 2017, Democrats made a point of running candidates in as many races as possible.

In Georgia, Democratic newcomers picked up two state House seats in areas near Athens that were previously written off as too conservative and where Democrats hadn't run candidates since lines were redrawn in 2012. In an Atlanta state Senate district, two Democrats will face a runoff in December to replace an incumbent Republican.

Many of the Democrats' gains in Virginia were also about seizing opportunity. Fourteen of the 15 seats Democrats gained in the House came in districts that had been won by Hillary Clinton in 2016 but were still represented by a Republican. As Sean Trende wrote for the conservative blog RealClearPolitics, "The map moved out from underneath Republicans while no one was looking ... Partisan loyalties and attachments change, and the map's strength is eroded."

But the yawning gap between Democratic votes and the post-election partisan balance in Virginia drives home the fact that, even in a favorable wave year, gerrymandering holds enormous power.

A moment for redistricting reform?

The disconnect between voters' choices and election outcomes has given new urgency to the fight for redistricting reform. As a new report by Democracy North Carolina highlights, 25 proposals for changing the redistricting process were filed in 2017 in seven Southern states, often with at least some support from Republican lawmakers.

Bills have included proposals to have commissions draw political lines instead of politicians and to bar partisan favoritism in redistricting, while measures introduced in Louisiana and Tennessee would end prison gerrymandering, which skews districts by including incarcerated persons in district population counts.

Of course, politicians have little incentive to abandon a system that's working for them, unless voters are able to hold politicians accountable for failing to embrace reform. It's notable that Virginia, a battleground state where the legislature has grown more competitive, is the only state where a bill banning use of partisan data in redistricting passed at least one chamber in 2017.

If Democrats can run more candidates and build on changing demographics and anti-Trump sentiment to make gains in 2018, reformers hope this can at least generate enough competition that there will be momentum for reform as the post-2020 redistricting process nears. As Brian Cannon, executive director of the redistricting reform group One Virginia 2021 said after this month's elections:

"You have this tsunami of an election … and it's weird we live in a democratic republic where the elections don't matter ... It is a populist wave in this country, whether it's the Tea Party or the anti-Trump resistance. People don't like incumbent protection plans. They don't like seeing politicians rigging the system."