The Georgia House is one of five key legislative chambers Democrats are targeting this year to win majorities in time for post-census redistricting. (Photo by Andre m via Wikimedia Commons.)

It's an old story now: In 2010, while Democrats focused their attention on the White House and Congress, Republicans were quietly laying the groundwork to take over state politics. Facing South was one of the first to report on a key piece of this strategy: the Republican State Leadership Committee's (RSLC) REDMAP project, which flooded states with money to wrest away control of state legislatures in time for redistricting after the 2010 census count. If Republicans could put themselves in charge of drawing favorable maps, the party could lock in control of state politics for a decade.

The impact was profound. Between 2008 and 2016, Democrats nationally lost 12 governorships and 958 seats in state legislatures. The trend was especially pronounced in the South: After the 2016 elections, when the Kentucky House flipped from blue to red, 100 percent of Southern state legislatures were ruled by GOP majorities.

With another round of redistricting on the horizon after the Census Bureau releases new population data at the end of 2020, Democratic and Republican groups are amassing vast war chests to win state legislatures. The Democratic Legislative Campaign Committee (DLCC) has pledged to spend $50 million on state house and senate races in 2020. In contrast to past years, when Democrats focused on a narrow tranche of states with high odds of success, the DLCC has labeled their 2020 efforts "Flip Everything," with a focus on races in Southern states including Florida, Georgia, North Carolina, Texas, and even West Virginia, a state Trump won by 42 points.

The RSLC, for its part, has promised to go toe to toe with the DLCC in the South and beyond. "Democrats can't beat President Trump and they can't take back the Senate, so they're spending staggering sums in state elections to make it easier for radical liberals to win in heavily gerrymandered districts," RSLC spokesperson David Abrams told Politico last month. "We're going to stop them by protecting our majorities in states the Left has failed to win in for years: North Carolina, Pennsylvania, Georgia, Texas, and more."

To date, campaign finance reports show that the DLCC has raised $16.7 million and the RSLC $17.3 million for their 2020 operations. This is a far higher degree of parity than 2010, when the Democratic group spent $10.9 million compared to $31.7 million for its GOP counterpart.

The efforts of these party committees will be augmented by independent groups like Forward Majority, whose progressive PAC spent half a million dollars to help Democrats win the Virginia House and Senate in 2019, and this year aims to deploy more than $2.2 million targeting 20 GOP-held seats in Arizona, Florida, North Carolina, and Texas.

National political groups aren't just interested in Southern legislatures because of state politics. Together, Florida, North Carolina, and Texas are also projected to gain six seats in Congress after the 2020 census. As Forward Majority notes, after post-census redistricting, the three states will account for 82 seats in the U.S. House; who controls the state redistricting process will shape whether those seats are friendly to Democrats or Republicans, changing the balance of power in Washington.

Here are the five key Southern legislative races to watch in 2020:

FLORIDA HOUSE: In Florida, many statewide races are infamously decided by the narrowest of margins. But for the Democrats, the task of winning the state House is a bigger challenge. After netting a gain of five seats in 2018, the party needs to flip another 14 to win a majority this year. Forward Majority argues that Democrats could have won more last cycle, if not for "under-funded close losses" in seats that could be competitive with the right level of investment: "Democrats garnered more than 45% of the vote in 18 districts, and another six were north of 44%," the group notes in its strategy document. "11 Republican-held seats were won outright by either Nelson or Gillum at the top of the ticket. These districts demonstrate the competitive landscape and define the path to the majority." 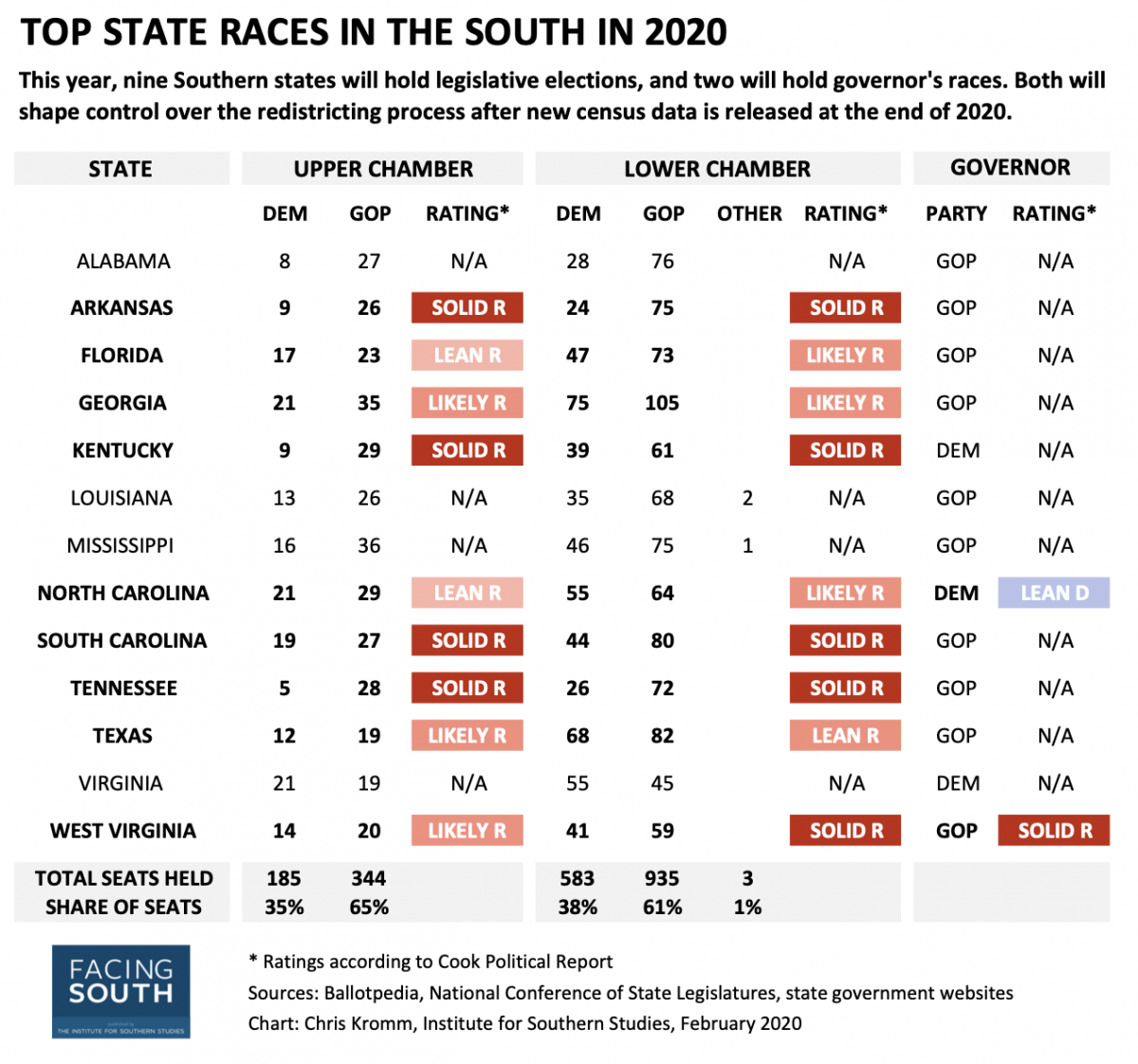 NORTH CAROLINA HOUSE: In 2018, Democrats picked up eight seats in the N.C. House; Dems now need to flip only five additional seats to win back a majority that they lost in 2010. The party's eight-seat gain last cycle actually understates the Democrats' success. In 2018, Democratic N.C. House candidates won 50.5 percent of the votes that were cast, compared to 48.2 percent for Republicans. Due to the magic of gerrymandering, however, the GOP walked away with 54 percent of the lower chamber's seats. A new set of legislative maps were finalized last November, which resulted in changes to 67 of the state's 120 House districts, somewhat leveling the playing field. But lawsuits haven't erased all of the GOP's redistricting advantages; that, combined with the power of incumbency, cause Cook Political Report to still rate the outcome as "Likely Republican," although Dems are more bullish on their prospects.

NORTH CAROLINA SENATE: The N.C. House was supposed to be the most fertile ground for Democratic gains in 2018, but, as a share of total races, Democrats actually had a higher win rate in the N.C. Senate, flipping six seats. Democrats will aim to shift an additional four seats in 2020 to bring the chamber to a 25-25 tie, or five to win a majority. As with the House, Democrats will be helped somewhat by a new set of maps finalized in November that redrew 21 of the Senate's 50 districts. But it's still an uphill climb; Cook Political Report rates the 2020 outcome as "Lean Republican."

GEORGIA HOUSE: Republicans enjoy a 30-seat edge in the Georgia House, which is why they're rated "Likely Republican" by Cook. But Democrats are cautiously optimistic about their chances in the House, where they need to take 16 seats from Republicans to seize the chamber. Their hopes aren't unfounded: In 2018, Stacey Abrams' gubernatorial run drove record turnout that helped flip 14 House seats for Democrats in the Atlanta suburbs. Democrats see up to 20 additional House seats they could potentially turn in 2020, including 16 where Abrams won 45 percent or more of the vote two years ago. They key for Democrats will be to match 2018 levels of registration and turnout — and have candidates in up-ticket races for president and U.S. Senate that can keep pace with the GOP voter mobilization driven by the Trump campaign.

TEXAS HOUSE: Texas Democrats need to win only nine House seats currently held by the GOP to win a majority, but they're targeting 22 races for potential pickups. As in Georgia, the math and strategy are influenced by 2018. Democratic U.S. Senate hopeful Beto O'Rourke was the top vote getter in the majority of Texas House districts last cycle and came within 10 points of winning in 22 of them; these are the Democrats' targets. Altogether, Texas Democrats picked up 12 seats in the House in 2018, and both parties agree up to 30 races statewide could be competitive. Democrats aim to register 2.6 million new voters in areas they think will benefit them; Republicans, in an unusual move, are organizing their own voter registration program — "Engage Texas" — targeting 1.6 million voters. Given the three congressional seats Texas expects to add after the 2020 census, Texas Democrats are casting their effort to win the state House as a national mission. As Texas Democratic Party Executive Director Manny Garcia said, "Flipping the Texas State House is the top strategic imperative for the Texas Democratic Party, because we know that when we flip the Texas House, we will reshape our nation.