Scientists have discovered that exposure to a common pollutant may make people more likely to experience severe symptoms from swine flu -- and it's a pollutant emitted in large quantities by coal-burning power plants and other industrial facilities.

The culprit is arsenic, a highly poisonous semi-metal which, according to a new study by researchers at the Marine Biological Laboratory and Dartmouth Medical School, compromises a person's ability to mount an immune response to the H1N1 swine flu virus.

Most disturbingly, the study -- published last month in the journal Environmental Health Perspectives -- found that arsenic can weaken the immune response to swine flu even in the low-level exposure levels that  are commonly found in contaminated drinking water.

When normal people or mice are infected with the flu, they immediately develop an immune response where immune cells rush to the lungs and produce chemicals to battle the infection, the researchers explain. But in mice who over the course of five weeks had ingested 100 parts per billion (ppb) of arsenic in their drinking water, the immune response to H1N1 infection was initially weak. When the response finally did kick in days later, it often overwhelmed the animal.

"There was a massive infiltration of immune cells to the lungs and a massive inflammatory response, which led to bleeding and damage in the lung," explains MBL senior scientist and report co-author Joshua Hamilton. The animals exposed to the arsenic were more likely to die from the infection than their counterparts who were not exposed.

For example, average arsenic levels in water from the Bruni Rural Water Supply Commission in Webb County, Texas were 90.87 ppb. Levels of over 100 ppb were also documented in the drinking water in Jim Hogg County, Texas.

When Hamilton and his colleagues heard about the recent H1N1 outbreak, they were struck by the fact that there are high arsenic levels in well water in many parts of Mexico. That includes Veracruz, where news reports placed the first case of H1N1 swine flu, though there are now questions about that time line since the U.S. Centers for Disease Control and Prevention in Atlanta more recently reported that the virus likely started circulating among the Mexican people as early as the fall of 2008.

No link has been established between any specific case of swine flu and arsenic exposure, "but it's an intriguing notion that this may have contributed," Hamilton says.

Arsenic has been linked to cancers of the bladder, lungs, skin, kidney, nasal passages, liver and prostate as well as fetal malformations. Earlier research by Hamilton and colleagues found that arsenic also disrupts the endocrine system that controls the release of hormones. 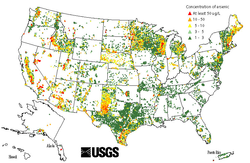 There are many parts of the United States where groundwater naturally contains high arsenic levels, including large swaths of Texas and Florida (click on map at left to see a larger version). If tests show that your water has high levels of arsenic, the Natural Resources Defense Council recommends purchasing filters certified by NSF International to remove it.

But arsenic is also released into the environment through industrial pollution. Across the United States, there are more than 700 toxic waste sites overseen by the Environmental Protection Agency's Superfund program where arsenic is a contaminant of concern. There are also scores of industrial facilities that routinely release arsenic and arsenic compounds to the air and water or dump it into surface impoundments like the one that collapsed last December at the Tennessee Valley Authority's Kingston plant in Roane County, Tenn., according to the EPA's online Toxics Release Inventory. All of these create potential exposure pathways for people.

Of the top 25 industrial emitters of arsenic and arsenic compounds via point-source air emissions (that is, releases through confined streams like smokestacks) in 2007, 22 were coal-fired electric power plants, according to the most recent TRI data available. The big arsenic air polluters are concentrated in the South, with 10 of the top 25 arsenic-emitting facilities located in the region.

In the Southern states, the biggest emitters of arsenic and arsenic compounds to the air were the Southern Company's Bowen plant in Bartow County, Ga. and Progress Energy's Roxboro plant in Person County, N.C., each of which released 2,200 pounds of arsenic to the air in 2007 alone. Besides coal-fired power plants, the other big arsenic emitters were copper refineries in Texas and Utah and a glass plant in Kentucky. The following are the top 25 point-source air emitters, their location and the amounts released: 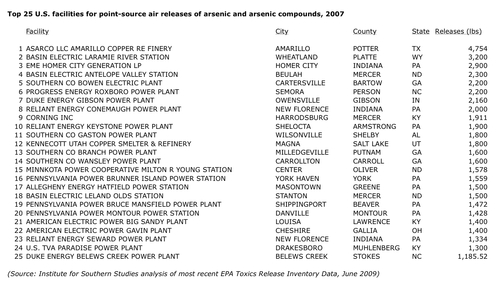 In the South, the biggest dumper of arsenic and arsenic compounds into surface waters in 2007 was Dominion Power's Chesterfield power plant in Chesterfield County, Va. at 4,500 pounds. It was closely followed by the TVA's Johnsonville plant in Humphreys County, Tenn. at 4,200 pounds and TVA's Widows Creek plant in Jackson County, Ala. at 3,900 pounds. In fourth place was TVA's Kingston plant, which dumped 2,700 pounds of arsenic and arsenic compounds into nearby waterways in 2007. The following chart shows the top 25 emitters of arsenic to surface waters: 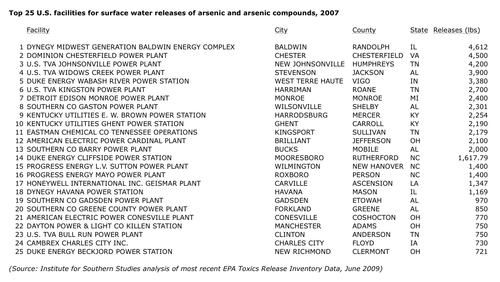 The failure of the Kingston plant's coal ash impoundment also released significant quantities of arsenic into the environment. An analysis of water samples taken downstream of the spill and released earlier this year showed elevated levels exceeding standards set to protect humans from dangerous concentrations of pollution, with arsenic levels more than double acute toxicity levels. The tests, which were sponsored by the Environmental Integrity Project and United Mountain Defense, also found widely fluctuating arsenic levels in the nearby Emory and Clinch rivers, with some 37 times higher than safe drinking water standards.

Catastrophic failures like the one at the Kingston plant are not the only ways coal ash impoundments are contaminating the environment with arsenic. For example, high levels of the chemical were recently discovered in water and sediment samples collected downstream of Progress Energy's coal-fired power plant near Asheville, N.C., raising concerns that arsenic contamination from unlined coal ash impoundments is seeping into the environment. In addition, a 2007 assessment by the EPA documented coal ash waste dumping sites around the country associated with arsenic contamination.

Enormous quantities of arsenic are currently being dumped into these unlined and poorly regulated surface impoundments at coal-fired power plants across the country. An EPA analysis found people living near these coal ash dump sites have as much as a 1 in 50 chance of getting cancer from drinking water contaminated by arsenic, and evidence has surfaced since then suggesting the risk may be even higher.

Of the 25 surface impoundments where the greatest quantities of arsenic and arsenic compounds were dumped in 2007, 17 were at coal-fired plants; of those 17 plants, 12 are located in the South, as shown in the following chart. Note that TVA's Kingston plant doesn't even make the list of the top 25 facilities; the 44,000 pounds of arsenic and arsenic compounds it dumped into its surface impoundment in 2007 put it at number 27 on the list. 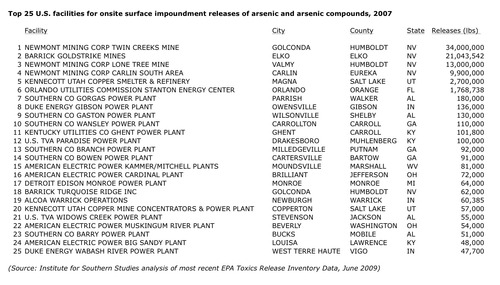 In the U.S. to date, the swine flu virus has sickened more than 13,000 people and caused at least 27 deaths, according to the CDC. This week the World Health Organization said it was getting close to declaring a pandemic as the virus has infected more than 26,500 people in 73 countries, while researchers warn that the current outbreak may be only a "dress rehearsal" for a wider pandemic to come.

Many questions still remain about the virus. For example, last month we reported that scientists working to understand the genetic makeup of the current H1N1 strain linked it to a virus behind a 1998 swine flu outbreak at an industrial hog farm in eastern North Carolina. But Dr. Barrett Slenning, an epidemiologist at N.C. State University's College of Veterinary Medicine, points out that subsequent laboratory research suggests the 1998 virus was not a direct predecessor to the current H1N1, with recent genetic analyses showing greater similarities to flu strains from Asia.

"It all points to the importance of human health, animal health, and environmental health workers needing to come together," says Slenning. "You cannot protect one without protecting the others."

And when it comes to protecting ourselves from the worst effects of swine flu, it might also help to exercise precaution by reducing our exposure to arsenic -- which ultimately means cleaning up dirty coal plants and carefully regulating their toxic waste.


But that won't be easy. While environmental advocates have been pressing hard for enforceable federal standards governing disposal of coal ash waste in the wake of last December's Kingston disaster, some in Washington are working to protect the dirty and dangerous status quo -- despite new research suggesting that regulations to require safer storage of coal ash waste will likely produce far more benefits than costs.

This week, for example, congressional allies of electric utilities have been circulating "Dear Colleague" letters that oppose regulating coal ash as hazardous waste, instead calling only for federal "guidelines" for coal ash disposal rather than enforceable standards. The letters are based on the notion disproved by the Kingston spill that the current patchwork of state regulations is adequate for protecting the environment and public health.

In response, the nonprofit Environmental Integrity Project -- which has taken a lead role in pressing for better regulation of coal ash -- is urging concerned citizens to call their representatives in Congress and ask them not to sign the letter. Instead, says EIP, lawmakers should support consistent and enforceable regulations of arsenic-contaminated coal ash waste to better protect their constituents' health.