The Republican State Leadership Committee, a Washington, D.C.-based super PAC that gets funding from North Carolina corporations including Reynolds American and Duke Energy, helped draw the state's congressional districts such as the 12th (pictured) that were recently ruled unconstitutional. It also helped elect N.C. Supreme Court Justice Paul Newby, who approved the maps.

This week a panel of three federal judges refused to delay its order that North Carolina redraw congressional maps before the state's March 15 primary elections on the grounds that North Carolina's 1st and 12th districts were unconstitutionally gerrymandered along racial lines.

The ruling was not a surprise: North Carolina's congressional and legislative districts have been embroiled in litigation since they were devised by state Republicans after the 2010 Census. In their decision, the judges agreed with voting rights plaintiffs who argued that the unconstitutional way race was used as a "nonnegotiable criterion" in drawing up the maps outweighed the inconvenience the ruling posed to the state, which would could be forced to move its primaries if the ruling stands.

State attorneys immediately appealed the decision to the U.S. Supreme Court; elections experts are split in their predictions about which way the high court will rule.

The North Carolina case highlights the growing role of powerful, well-funded political organizations in the high-stakes world of election map-making. In North Carolina, the Republican State Leadership Committee — a Washington, D.C.-based super PAC created in 2002 to elect state-level GOP candidates — played a uniquely influential role in both creating the state's contested districts and helping to elect state lawmakers and a N.C. Supreme Court Justice who would pass and approve them.

WINNING THE LEGISLATURE: As documented by Facing South and others, in 2010 the Republican State Leadership Committee made it a priority to win over state legislatures in time for the biennial redistricting process. The RSLC funneled $1.25 million to Real Jobs NC, a 527 political committee launched by conservative donors including Art Pope, who sat on the group's board.

Real Jobs NC was part of a constellation of Pope-connected groups that targeted nearly two-dozen races. Republicans won 80 percent of the contests, helping fuel the GOP's historic capture of the N.C. General Assembly, and putting Republicans in charge of drawing the state's new Congressional and legislative districts.

As reported by ProPublica, Chris Jankowski — who headed both the RSLC and the Leadership Foundation — wrote a letter to North Carolina lawmakers describing the role his groups could play in the process. The letter, which became public as a result of the redistricting lawsuits, read in part:

Our team would be happy to assist in drawing proposed maps, interpreting data, or providing advice … We are engaged in a number of states and believe we are playing a meaningful role in helping draw fair and legal lines that will allow us to run competitive elections in 2012 and in future cycles.

Heading the Leadership Foundation's redistricting team was Tom Hofeller, a GOP mapmaking veteran. On Feb. 1, 2011, Hofeller came to North Carolina for the first of 10 visits he would make to the state. According to depositions gathered in the lawsuit, Hofeller and others — including Art Pope — used Hofeller's software to create a so-called "10-3" map that would pack Democrats (and African Americans) into three districts, allowing 10 others to be dominated by Republicans.

SECURING THE COURT: With North Carolina's controversial districts guaranteed to face a robust legal challenge, the RSLC moved aggressively to secure a conservative majority on the N.C. Supreme Court, where the redistricting lawsuit would be heard.

In 2012, with conservative Justice Paul Newby facing a tough election and the court's 5-4 conservative majority on the line, the RSLC funneled nearly $1.2 million into the North Carolina-based group Justice for All N.C., formed in May of that year. Justice for All then used that money and donations from other sources to fund another state-based group, the North Carolina Judicial Coalition, which ultimately spent nearly $2 million on ads supporting Newby. Justice for All also spent $175,000 directly on ads supporting Newby, who beat opponent Sam Ervin by a 52-48 margin.

In 2014, the RSLC sent over another $1.3 million to Justice for All, which spent nearly $900,000 on a widely-panned attack ad against incumbent justice Robin Hudson, and $425,000 more supporting conservative candidate Mike Robinson in a second supreme court race. Both liberal incumbents held onto their seats.

The N.C. Supreme Court ruled twice to accept the congressional and state legislative districts, most recently in December 2015 on a 4-3 decision following party lines. Justice Newby refused a request from attorneys involved in the redistricting lawsuit that he recuse himself, given the role the RSLC played in both drawing the maps and electing him to office.

This week, the state Supreme Court refused to rehear a different case that challenges both the legislative and congressional districts, a case that may also end up at the U.S. Supreme Court.

The RSLC's role in North Carolina's judicial elections has been especially controversial given the backing the political group receives from key corporate interests in North Carolina, including companies and groups with business before the N.C. Supreme Court.

A Facing South/Institute for Southern Studies analysis of reports submitted to the Internal Revenue Service finds that eight North Carolina companies have given $100,000 or more to the RSLC since 2011. While the donations slowed slightly in 2015, they continue to come from many of the companies that have been faithful donors over the years. Total contributions from North Carolina businesses to the RSLC totaled nearly $733,000 last year.

Among the largest North Carolina backers of the Republican State Leadership Committee:

REYNOLDS AMERICAN: Leading the pack by a wide margin is tobacco giant Reynolds American, based in Winston-Salem, which has given the RSLC close to $3.1 million over the past five years. Last year, Reynolds completed a $27.4 billion merger with Greensboro-based tobacco company Lorillard, which is the state's second-biggest donor to the RSLC, having pitched in nearly $335,000 since 2011. The merger unites two already substantial political donors to conservative groups. In addition to funneling money through the RSLC, the two companies — which have had key cases appear in N.C. courts in recent years — have been directly involved in spending on judicial elections: Since 2012, Reynolds American has given Justice for All $130,000 and Lorillard has donated $25,000. Reynolds gave $150,000 to the N.C. Judicial Coalition in 2012.

DUKE ENERGY: The nation's biggest utility company, which has had considerable business before the high court regarding rate hikes and environmental issues such as its 2014 coal ash spill, has given consistently every year since 2011 for a total of $305,000. 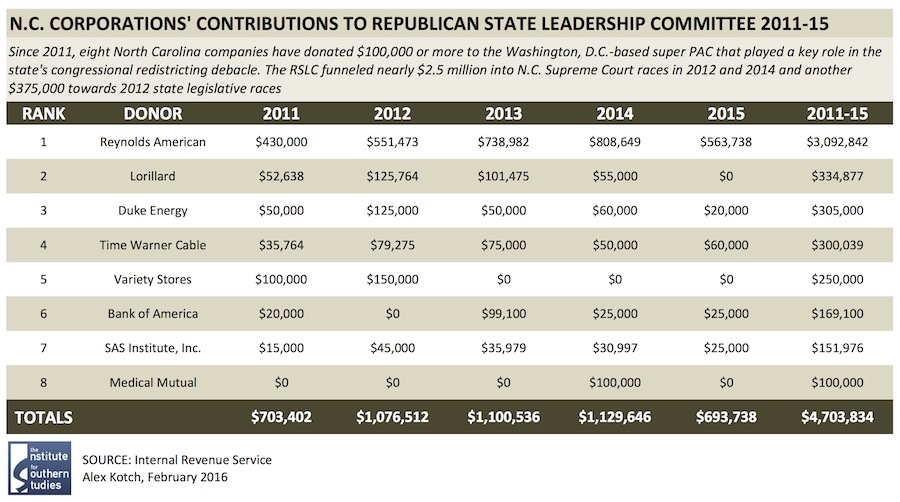 While North Carolina's 2010 maps continue to be fought out in the courts, the Republican State Leadership Committee already has its eyes on the future: The group has launched its Redistricting Majority Project (REDMAP) for 2020, when the next Census is due, with a goal of spending a whopping $125 million on its efforts.