Among the scheduled speakers for the upcoming conference sponsored by the conservative Civitas Institute is Nigel Farage, a nationalist British politician known for his anti-immigrant statements. He's also been named as a "person of interest" in the ongoing U.S. investigation into potential links between President Trump and Russians in the 2016 election. (Image from the CLC website.)

An anti-gay leader whose group crusades against "the homosexual agenda." A gun zealot who last year auctioned off AR-15 rifles with a portrait of Hillary Clinton, ostensibly for target practice. A controversial Brexit leader from England recently named a "person of interest" in the FBI's investigation into President Trump's ties to Russia.

These are among the featured speakers at this year's Conservative Leadership Conference, a gathering of the political right scheduled for mid-June in Raleigh, North Carolina. The event is organized by the Civitas Institute, a conservative think tank that for years had been almost entirely funded by North Carolina Republican megadonor Art Pope.

However, Civitas and the conference now list a new set of financial backers, with Duke Energy, Blue Cross Blue Shield of North Carolina and the Cigar Association of America among the sponsors of the June event.

As recently as 2010, Art Pope's family foundation accounted for 90 percent of the Civitas Institute's funding. However, after Pope's central role in driving conservative policy in North Carolina attracted widespread scrutiny, Civitas has brought in other money sources, including several corporate backers.

A Facing South/Institute for Southern Studies analysis of the group's annual tax records through the middle of 2016 finds several large companies that have become Civitas supporters since 2014:

While the Civitas conference, slated for June 16 and 17 at the Raleigh Marriott, features a handful of elected Republican officials, it also includes several notorious figures of the extreme right. Among the more controversial names on the speaker list:


The Civitas Institute's latest tax filings show Art Pope's foundation supplying just under half (45 percent) of the group's income in 2016. However, Civitas is still benefiting from the North Carolina retail tycoon's influence. 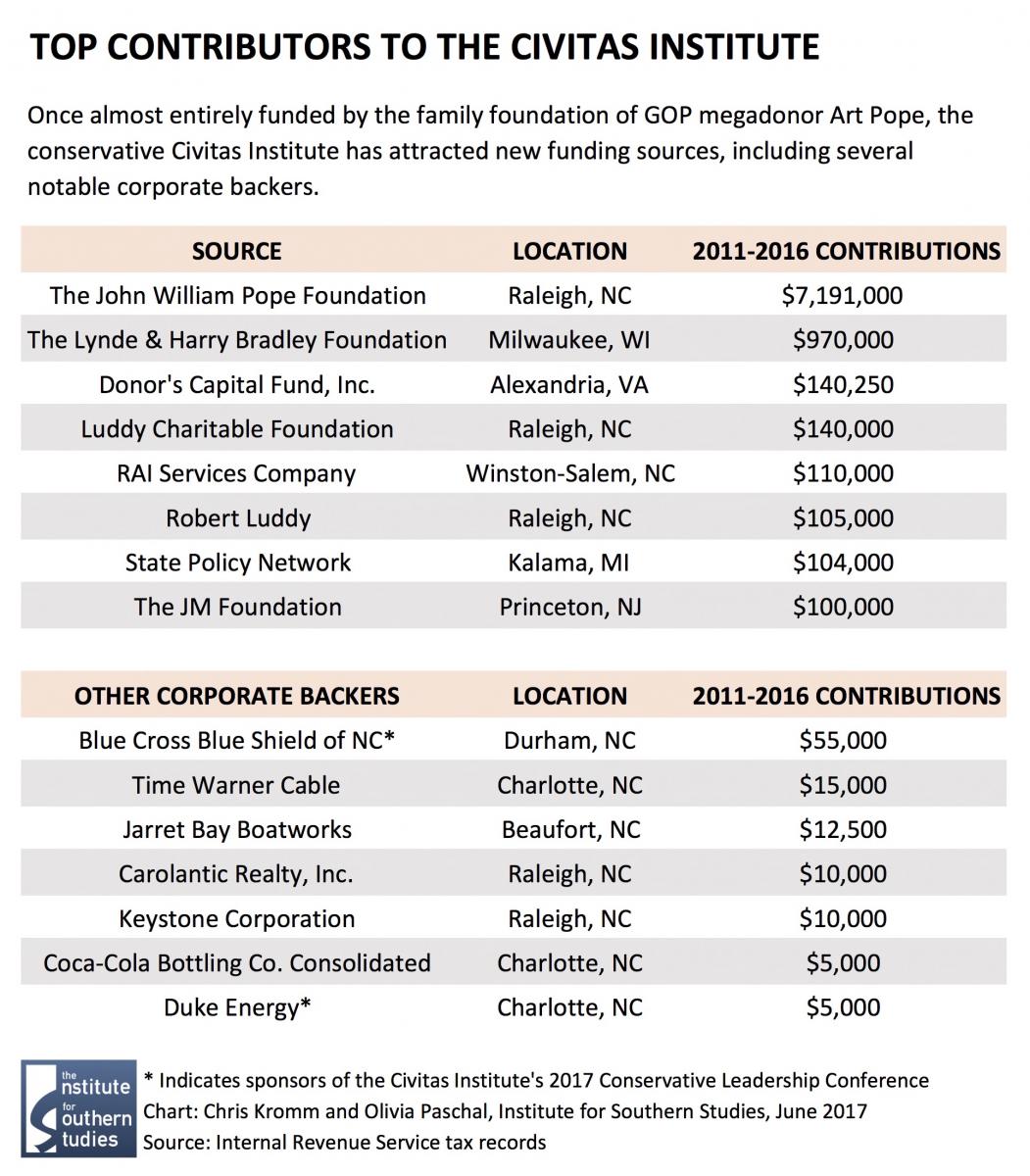 The second-biggest funder of the Civitas Institute is the Lynde and Harry Bradley Foundation, a leading conservative funder based in Wisconsin worth more than $900 million. Pope chairs the board of the foundation, which gave Civitas $970,000 between 2013 and 2016, including a $550,000 contribution in 2016. In recently-published internal foundation documents unearthed by hackers last year, it was revealed that North Carolina is one of five states targeted in a major new initiative the foundation is spearheading to build "conservative infrastracture."

While not listed in the latest Civitas tax returns, other business sponsors of the 2017 leadership conference include the Cigar Association of America, an industry lobbying group, and Aesthetic Images Photography, a company owned by Tea Party activist and Republican donor Jeff Hyde of Greensboro, North Carolina.