Although Democrats lost a high-profile race for governor in Georgia this year, high turnout and changing demographics have propelled Democrats to a net gain of 15 legislative seats in the state since spring 2017. (Photo via Better Georgia)

It's easy to forget now, but a decade ago Democrats were the dominant party in state legislatures across the South.

After the 2008 elections, Democrats held a majority in 14 of the South's 26 state house and senate chambers, helped by a modest "blue wave" tied to President Obama's first campaign, friendlier political maps, and the election of moderate-to-conservative white Democratic lawmakers.

By 2016, the Democrats' dominance in Southern state legislatures had been largely erased. After the dust had settled after Election Day, all of the South's legislative chambers were under Republican control, with the Kentucky House being the last to lose a Democratic majority.

When Southern legislatures gavel into session in 2019, Republicans will still enjoy majority control in all of the South's upper and lower chambers. But for Southern Republicans, there is cause for concern: Since the election of President Trump, Democrats have gained ground in key Southern states.

A Facing South/Institute for Southern Studies analysis finds that since spring 2017, in a series of regular and special elections, Democrats have added a net total of 67 legislative seats in the South, with a small handful of positions yet to be filled. 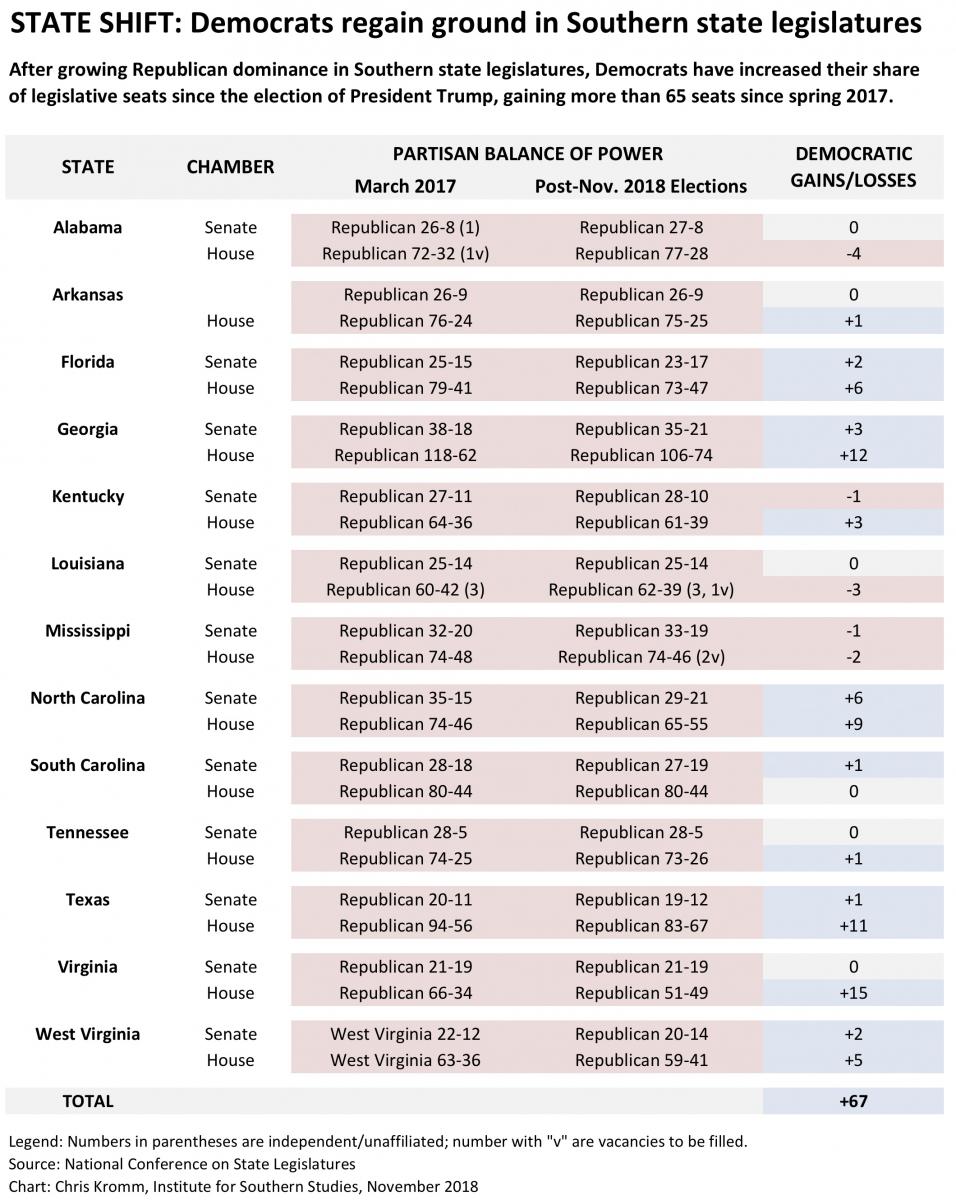 The Democrats' fall in Southern legislatures over the last 10 years is part of a larger national story. Nationally, Democrats ended the 2016 elections with 1,000 fewer legislative seats than they had in 2008. Unprecedented election spending in state races by Republican groups in 2010, fueled in part by the Supreme Court's Citizens United decision, combined with a massive GOP backlash after Obama's election to propel Republicans to majorities in dozens of chambers across the country.

After the 2010 elections, the number of legislative chambers Democrats controlled in the South had been cut in half to seven. Combined with GOP wins in key governor's races, this put Republicans in charge of the post-census redistricting process in many Southern states, allowing them to redraw state legislative districts that helped pave the way for more legislative gains in 2012, 2014 and 2016.

But in the face of these larger trends, Democrats continued to show signs of life in state politics. In 2016, in six states carried by Trump — Arkansas, Florida, Georgia, North Carolina, Texas and West Virginia — Democrats actually made small gains in state house and senate chambers, drawing on shifting demographics to overcome the obstacles posed by largely GOP-leaning maps.

Since Trump's election, Democrats have accelerated their gains in key Southern states. Since early 2017, Democrats have registered net gains in 15 Southern legislative chambers, including double-digit increases in their share of house members in Georgia (which added 12 Democrats in 2018), Texas (+11 for Democrats), and Virginia (Democrats picked up 15 seats in 2017). In North Carolina, Democrats gained six seats in the N.C. Senate and nine in the House in 2018, breaking a Republican supermajority in both chambers and the GOP's ability to override vetoes from the state's Democratic governor.

The Democrats' gains in Southern state legislatures have been most pronounced in the region's "purple" battleground states, or where Democrats in 2018 competed in other high-profile races that mobilized party voters, as in Florida, Georgia and Texas. The Deep South states of Alabama, Louisiana and Mississippi have actually seen a small decline in Democratic legislators during the Trump era, while the Appalachian states of Kentucky, Tennessee and West Virginia witnessed modest Democratic gains.

These legislative gains — mostly incremental, at times in double-digit leaps — have Democrats eyeing the potential to reclaim or at least strengthen their hand in key Southern chambers in 2019 and 2020, giving them greater control over the critical redistricting process that will follow.

Currently, there are 10 legislative chambers in the South* where Democrats could win a majority by flipping eight seats or less in upcoming elections. Making such gains won't be easy, and Republicans will still benefit from friendly maps. But if Democrats can capitalize on changing demographics in the South and another surge in motivated Democratic voters in the 2019 and 2020 elections, the Republican hold on Southern state politics may begin to slip.

Supreme Court could give legislatures unprecedented control over elections

An end in sight for N.C.'s gerrymandered congressional maps?