Democrats didn't win control of any state legislatures in the South in 2020, but the party made modest gains in both the Georgia House and Senate, lifted by President-elect Joe Biden's narrow victory in the state. (Photo of the Georgia State Capitol by connor.carey via Wikimedia Commons.)

This was supposed to be the year that Southern Democrats, after a decade of defeats in state politics, would finally have a decent chance of gaining ground in state legislatures — and maybe even winning majority control in a few chambers.

The stakes were high coming into 2020: After the conclusion of this year's decennial census, states would be using their new population numbers to draw new political maps in 2021. For Democrats, winning legislative majorities would help them avoid the debacle of 2010, when Republicans captured key chambers in the South and created state districts that locked in GOP control. Democrats went from enjoying a majority in 14 of the South's 26 legislative chambers in 2008, to Republicans controlling every chamber in the region after the 2016 elections.

This year, Democrats also had momentum: In the 2018 midterms, the party picked up 67 seats in state legislatures across the South. In 2019, Democrats in Virginia swept both the House and Senate chambers, forming a left-leaning trifecta with the state's Democratic governor. Democrats targeted dozens of key legislative races in Florida, Georgia, North Carolina, and Texas with high hopes for success.

As with many of the Democrats' loftier goals for 2020, the Democratic revolution in Southern state legislatures failed to materialize. While Democrats turned out in record numbers, Republicans — driven by enthusiasm for Trump among the GOP's base — matched, and in some cases exceeded, Democratic turnout. GOP voter enthusiasm, combined with maps that still worked in the GOP's favor, ultimately caused Democrats to lose ground.

A Facing South/Institute for Southern Studies analysis finds that, with at least 10 races still too close to call, Republicans gained 48 seats in Southern legislatures in 2020. The GOP held onto its majorities in all legislative chambers outside of Virginia. As of this writing, Democrats gained ground in only five chambers, most notably Georgia: In the state where President-elect Biden narrowly beat President Trump by more than 12,000 votes and two U.S. Senate races are going to a runoff, Democrats also appear to have gained a seat in the Georgia Senate and three seats in the Georgia House.

Just as the level of Trump voter enthusiasm had been underestimated in the polls, Democrats appear to have been unprepared for the impact of GOP voter turnout on state legislative results. As Christina Polizzi, a spokesperson for the Democratic Legislative Campaign Committee, told Politico, "It's clear that Trump isn't an anchor for the Republican legislative candidates. He's a buoy. He overperformed media expectations, Democratic and Republican expectations, and lifted legislative candidates with him."

Republicans, for their part, were ecstatic about their ability to fend off Democratic challengers, and weren't shy about spelling out the implications of their ability to control the redistricting process in Southern states.

"The results that we saw last night and that will continue to come out throughout the day today and the rest of this week will put the Republican Party in a position where we're able to secure a decade of power across the country," said Austin Chambers, president of the Republican State Leadership Committee. "And it's something that the Democrats were desperate for, and they came up well short." 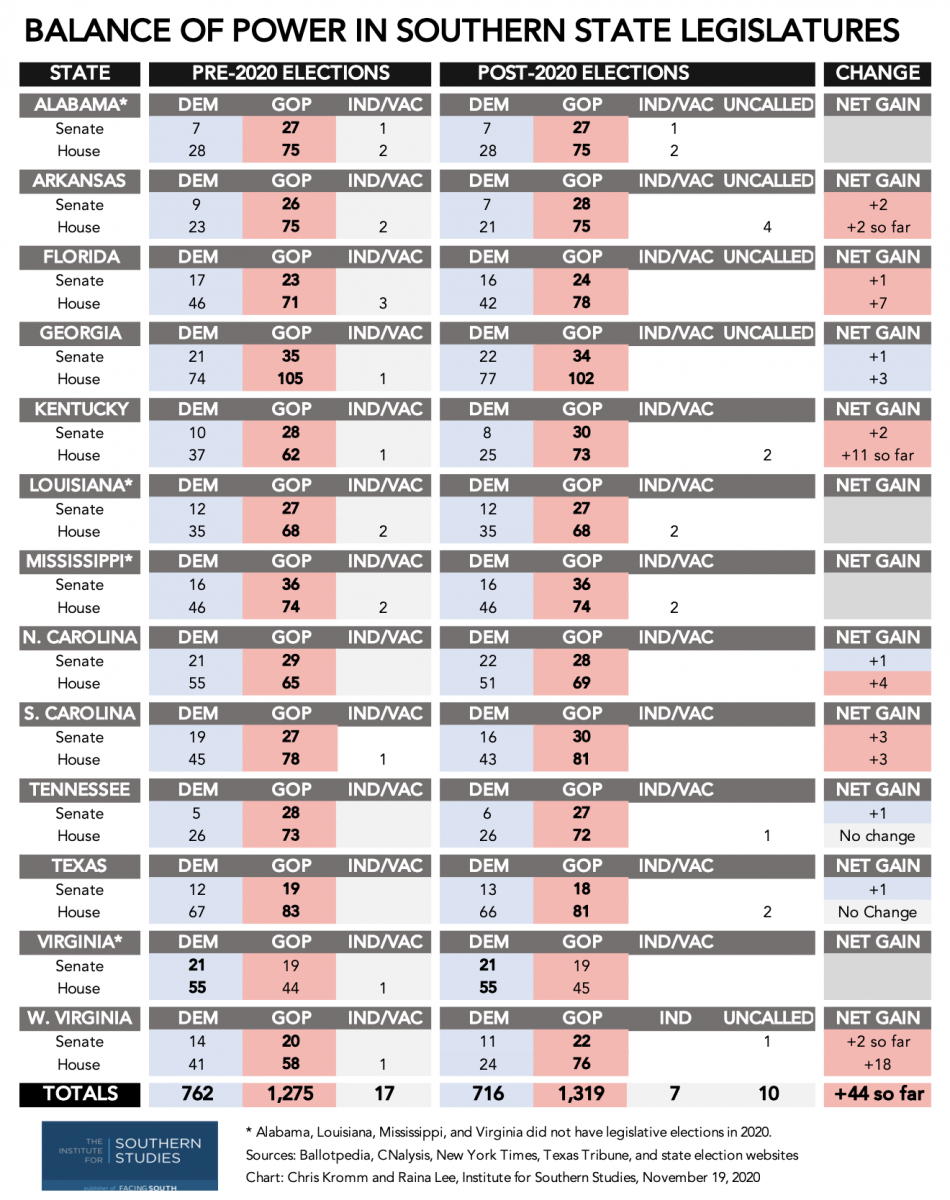 Of special interest to Democrats in 2020 were chambers in fast-growing Southern states, including three states that are likely to gain congressional districts after new census numbers are released: Florida, North Carolina, and Texas. Here's how Democrats fared in those states.

The Florida legislature was one of the most enticing targets for Democrats but also was understood to be one of the most difficult. Republicans entered the election with a six-seat majority in the state Senate, and a daunting 25-seat advantage in the House. Heading into the 2020 elections, the Cook Political Report rated the likely outcome as "Lean Republican" for the Senate, and projected it "Likely" the House would stay in GOP hands.

Florida ended up being a disappointment for Democrats up and down the ticket. While Democrats were able to gain a higher vote share for president in 2020 compared to 2016 in most Southern states, Trump actually increased his share of the presidential vote by more than two points in Florida — the biggest pro-GOP swing of any Southern state.

This Trump voter surge doomed any Democratic chances of gaining ground in Florida's legislature. Current results show that Republicans gained a seat in Florida's Senate and seven seats in the House, expanding the GOP's control.

Georgia state legislative races didn't get the same attention from Democrats nationally, in part likely due to the scale of GOP control in the state. Democrats came into 2020 facing deep deficits in both the House, where Republicans enjoyed a 31-seat advantage, and the Senate, where the GOP margin was 14 seats.

But in the 2018 midterms, Democrats leveraged progressive voter enthusiasm — fueled by a high-turnout race for governor featuring Stacey Abrams as the progressive standard-bearer — into a three-seat gain in the Senate and picked up 12 seats in the House.

Democrats didn't win majorities in the Georgia House or Senate in 2020. But, lifted by the immense turnout for the presidential race that turned the state into the South's marquee battleground, Georgia was the only state where Democrats gained ground in both their upper and lower legislative chambers.

Democrats still have a long way to go in wresting control of the legislature from the GOP, a task that will be made even more difficult as Republicans draw favorable maps in 2021, with support from a Republican governor. Heading into next year's legislative session, Republicans maintain a 34-22 advantage in the Georgia Senate, and a 78-42 majority in the House.

The North Carolina General Assembly was a top Democratic target in 2020. State Democrats already had a sitting Democratic governor and attorney general, and in 2018 Democrats had gained 15 seats in the General Assembly, six in the Senate, and nine in the House. On top of that, years of litigation over the state's Republican-drawn legislative maps had resulted in a set of new, more competitive maps unveiled in 2019 that affected 67 of the state's 120 House districts, and 21 in the Senate.

The promise — and for Republicans, the threat — of turning North Carolina's legislature blue also attracted lots of money. The national Democratic Legislative Campaign Committee poured at least $3 million into the state's legislative contests, announcing in October that "North Carolina is one of the most important battlegrounds at all levels of the ballots this year." Republicans invested heavily too, with multimillion-dollar investments from the Republican State Leadership Committee, the Good Government Coalition, and other entities.

Armed with momentum, battleground status, new maps, and money, Democrats were bullish on their chances. But the blue revolution came up short. Both chambers stayed in Republican hands; and in the North Carolina House, Democrats lost ground.

In the North Carolina Senate, Democrats flipped two districts: Senate District 18 east of Raleigh, and Senate District 14, south of Charlotte, both suburban areas. However, they lost coastal Senate District 9, which includes Wilmington, for a net gain of one seat in the upper chamber. Heading into 2021, Republicans hold a 28-22 majority

The House was more bleak for Democrats. The sole bright spot was a victory for community activist Ricky Hurtado in House District 63 in central North Carolina. A Princeton graduate and the son of Salvadoran immigrants who received endorsements from Barack Obama and Elizabeth Warren, Hurtado edged out the Republican incumbent with 50.6 percent of the vote, becoming the first Latino Democrat elected to the North Carolina House. But Republicans were able to not only hold all of their other House seats, but also move five more into the Republican column, for a net gain of four seats, bringing the GOP majority to 69-51.

Just as Stacey Abrams' 2018 gubernatorial campaign helped shift the political calculus in Georgia, the senatorial aspirations of Beto O'Rourke in Texas that same year helped put the state on the map as a state worthy of Democratic investment. The Democratic Legislative Campaign Committee pledged $1.3 million, and the independent progressive group Forward Majority poured in $12 million. House incumbents and candidates in Texas raised a record $117 million over the 2019-2020 election cycle, according to the Montana-based National Institute on Money in Politics.

Texas Democrats targeted a map of more than 20 districts in the House. But ultimately, dreams of turning at least a chamber of the Texas legislature blue came up short. After all the money and national attention, if current results hold, the makeup of the Texas lower chamber will be exactly where it was coming into 2020: an 83-67 advantage for Republicans.

In line with national trends, Democrats were able to build up the party and mobilize voters, but were overmatched by turnout from motivated Trump and GOP voters. That puts Texas Democrats in a stronger position for future contests, but that's little consolation for party leaders — especially with redistricting on the line.

As Texas Democratic strategist Matt Angle said, "We turned out at the level that we thought we need to win, but they were able to turn out as well. There's no question that things are better for Democrats in Texas, but, as I tell my staff and everybody else, better is not good enough. We were trying to win."

Can Democrats win Southern legislatures in time for redistricting?