We're getting closer! We continue our series of the Top Stories of 2009 here at Facing South. To see the earlier entries go here. And coming in at #2 ... 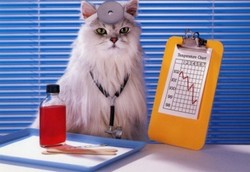 No, this isn't another entry in the dreaded Lolcats franchise -- but it could have been, given the wacky and hilarious-if-it-wasn't-so-tragic road to health "reform" this year.

Amidst the near-daily ups and downs of the health reform debate, here at Facing South we stayed focused on the bigger questions: Who stands to benefit? Who is going to lose? And what does it mean for everyday people?

In addition to our intervention on the Palin "death panel" craziness -- which got its own special shout-out at #7 ("No, Obama won't kill your grandma") -- here are some of the other key stories about the health care debate Facing South broke or gave wider exposure:

* We exposed the inconsistencies and divided loyalties of reform opponents like Rep. Mike Ross (D) of Arkansas, revealing his ties to the health industry -- and the fact that his district has the city with the worst health insurance monopoly in the nation.

* We also watched other Blue Dogs, Iike Rep. Heath Shuler (D-NC) and Rep. Jim Cooper (D-TN) -- who argued for dropping a public option in favor of health "co-ops," even though we revealed he had blasted the idea of government co-ops before.

* In the Senate, we exposed the way key Democratic Southerners like Sens. Kay Hagan, Mary Landrieu and Blanche Lincoln played in dilluting or delaying reform -- although in Landrieu's case, we also revealed the hypocrisy behind charges that she had "sold" her vote, given that she had only successfully inserted a measure Southern Republicans had been asking for.

* We reported on the powerful interests spending millions a day to stop reform, like Blue Cross Blue Shield (and here and here) and the U.S. Chamber of Commerce.

* We also showed the real-world consequences of our failing health system: monopoly-controlled health care, the spectacle of doctors scurrying to set up free health clinics in states where leaders oppose reform, and most tragically of all, a rising death toll from lack of care -- including 2,200 veterans and severe racial disparities.

We'll see what's left of the promise of "reform" after Congress and special interests are done with it. But if nothing else, the experience of 2009 -- brought to light by Facing South and other dogged bloggers/reporters -- hopefully opened the eyes of the public to how power and profit shape politics, and how we need to keep standing up for the public good.

The money behind Big Oil's win on Atlantic drilling